Acting on guidance from the Supreme Leader’s office, Iran’s Friday prayer leaders pressed the Rouhani Government over the nuclear deal with the US and other powers.

The clerics denounced President Rouhani for weakness and negligence, four days after the Supreme Leader indicated that Iran might pull back from the July 2015 agreement which was implemented in January.

Ayatollah Khamenei said on Monday, “[The US is] calling for us to come negotiate on regional issues, but our experience with the JCPOA [nuclear deal] tells us that doing such a thing is a lethal poison. One cannot trust the Americans’ word on any issue.”

He then challenged Rouhani over the envisaged economic benefits from the agreement: “Weren’t the oppressive sanctions lifted so that the people would feel a change in their lives? Has there been a tangible effect on the people’s lives in the past six months?”

Ayatollahs took up the theme yesterday. In Mashhad, Ayatollah Alamolhoda called Rouhani “Mr. Gullible” for expecting that Iran would find “honor” through the deal.

The Ilam Friday Prayer Leader, Ayatollah Naghi Lotfi, asserted, “The people are tired of the empty slogans about the nuclear deal. They consider it to be a victory for our vengeful enemies like America.”

Tabriz Friday Prayer Leader Ayatollah Haji Zadeh said, “When the nuclear deal was signed, people said that it would remove sanctions. Yet nothing of the sort has been seen.”

And in Ahwaz, Ayatollah Ali Mousavi Jazayeri chided, “It has been clarified that negotiations with the U.S. and the nuclear deal have produced nothing for Iran except for hurting the Iranian nation.”

Soon after the announcement of implementation in January, the Supreme Leader chastised President Rouhani for saying that the Joint Comprehensive Plan of Action would be followed by a “JCPOA 2” for trade and investment after years of US-led sanctions. In late March, the Supreme Leader warned that he would take over planning for his “Resistance Economy” of self-sufficiency if the Government showed weakness in its stance on the US.

However, Khamenei had refrained from indicating until this week that Iran would step away from the agreement and risk economic collapse.

Iranian nuclear scientist Shahram Amiri has been executed, according to his family.

Marziyeh Amiri told BBC Persian that she met her son a day before he was executed on Wednesday.

Iranian authorities have not yet announced the execution.

Amiri was a nuclear researcher at Malek Ashtar University of Technology and worked for Iran’s Atomic Energy Organization. He disappeared during a pilgrimage to Mecca in 2009. Months later he appeared in the US as a defector.

In July 2010, he returned to Iran to a hero’s welcome as he renounced any ties with the West. However, he was later arrested and sentenced to ten years in prison.

The reason for the execution is unknown.

The leaders of the opposition Green Movement have marked 2,000 days under strict house arrest.

Mir Hossein Mousavi — who “lost” the disputed 2009 Presidential election to Mahmoud Ahmadinejad — was detained fellow 2009 candidate Mehdi Karroubi, and activist and academic Zahra Rahnavard were detained in February 2011. The regime shut away the three fearing a revival of the mass protests after the 2009 ballot.

Rahnavard, who is married to Mousavi, delivered a message to her children: “If 2,000 years pass, I will have no wish except the dignity of my country and freedom and justice for the people.”

Hassan Rouhani indicated in his Presidential campaign in 2013 that he would pursue the freedom of the opposition leaders, but he was soon blocked by hardliners and conservatives from making any move.

A leading Sunni cleric has criticized the regime’s executions of 20 Kurdish Sunni detainees.

The Friday Prayer Leader in Zahedan, Molavi Abdul Hamid, said the killings will have “negative consequences” and called upon officials to consider “the sensitive conditions in the region”.

He argued, “Enemies are always seeking to exploit divisions and insecurity [in Iran].”

The executions came as the Iranian regime has proclaimed that it will defeat the rising threat of “terrorism” in the country. Security forces and Kurdish insurgents have clashed in recent weeks, with the regime claiming that dozens of Kurds have been killed.

The regime has not released the names of the executed men.

On Friday, the Foreign Ministry denounced international criticism of the executions of the "terrorists".

Spokesman Bahram Qassemi called for resolve in "will and efforts to eradicate Takfiri terrorism, including the Daesh [Islamic State] terrorist group."

The Islamic Republic of Iran has always had a resolute policy stance with regard to the fight against terrorism and foreign-backed terrorist groups in the region. Iran is a victim of terrorism, and will spare no effort to ensure the security of its people.

Former President Mahmoud Ahmadinejad has denied that he is now re-entering politics; however, he has indicated that he could do so in the future.

Ahmadinejad said at a rally in Yazd Province, “I am involved in the country’s affairs, but it is not expedient now for me to enter [politics]. I will be in the service of the nation when the time comes.” 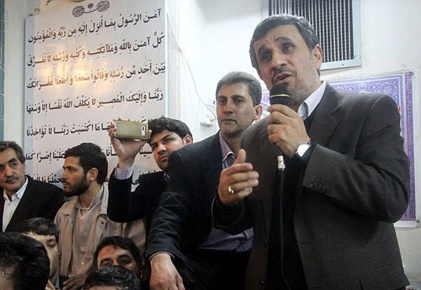 There is recurrent speculation in Iranian media that Ahmadinejad, who was President from 2005 to 2013 and who "won" the disputed election of 2009, will stand in next May's Presidential ballot.