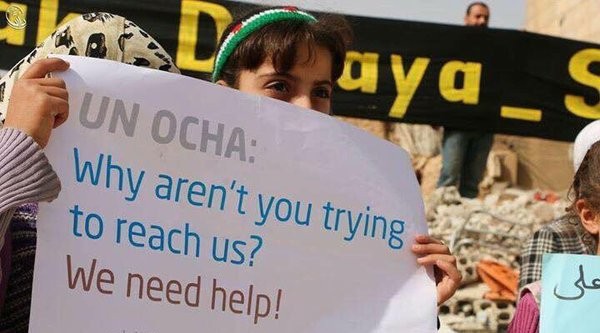 PHOTO: An appeal from Darayya to the UN, March 2016

The opposition-held town of Darayya, southwest of Syria’s capital Damascus, has held out against a regime siege and constant bombardment since November 2012.

However, the town is now under threat of regime occupation after months of ground assaults, supported by the aerial attacks including barrel bombs and missiles. Last month the Syrian military took plots of land, essential for the limited food supply, in the southwest. Last week, pro-Assad forces included armored vehicles advance in the east.

Has Darayya lost its entire breadbasket? How much wheat did the land yield?

We don’t have any more farmland in Darayya. Before seizing the land, Assad destroyed the crops. We don’t have an exact statistic, but we produced about 30 tons of wheat [annually]. It was our most strategic crop. We also planted beans, spinach, arugula, and mint.

This farmland was the basis of life in Darayya. It was the only source of food, particularly wheat, since the UN hasn’t been able to deliver any significant aid to civilians.

People relied entirely on the crops, which met the needs of most families in the city.

Where did the farmers go?

Most people aren’t farmers but they worked in agriculture because of the blockade. After the regime took the farmland, they fled to the center of city, even though 80% of the residential buildings are destroyed.

What is the solution?

To be honest, there is no solution except for allowing aid to enter the city. We see this as far-fetched, considering both the UN and international community’s weak stance in front of Assad. The regime is insistent with its motto “kneel or starve”.

What will people do now? Is starvation a real possibility?

We don’t expect deaths in the next few days, but death will be certain if the siege continues. Things are getting more difficult with each hour. We exhausted our entire food depository at the beginning of Ramadan.

There is fear for the lives of the injured, elderly and young children who need a certain amount of food and can’t hold out against hunger.

How long has the regime controlled this area?

The regime has gained territory over several months. Each time we lost a part of the city until we came to this point.