Syria Daily: Will Assad’s Forces Cut Off Opposition in Aleppo? 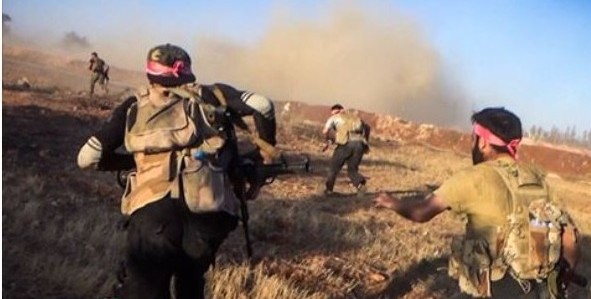 Pro-Assad forces are threatening to finally cut off the opposition in Aleppo, following an advance north of Syria’s largest city on Thursday.

Both pro-regime and pro-opposition accounts acknowledged that the Syrian military, enabled by Russian bombing and accompanied by Iraqi and Palestinian militias, moved into the southern part of the al-Mallah Farms. They closed on the al-Castello Road, the last main route into opposition-held parts of Aleppo.

The latest offensive by pro-Assad forces began last Friday. The regime, Russia, and foreign forces have been trying to cut off the route for months, with a series of failed offensives against the area near Handarat village and al-Mallah.

The city of #Aleppo has been officially besieged as Assad's forces cut off only route in or out. Over 300,000 people are under siege #Syria

Rebels said that they had regained some positions lost after a surge by the Syrian military on Wednesday night, but fighting was now 1.5 km (less than a mile) from the al-Castello Road, which was now within range of regime artillery.

They said the route had not been “cut”, as widely reported by mainstream media, but had been closed because of shelling and bombing.

A rebel fighter said that Russia and the Assad regime were “unleashing hell”, with “parachutes” — Russian bombs and possibly cluster munitions — “raining” on the al-Castello Road:

Drone footage from an outlet connected with the regime military:

The Syrian military had declared a 71-hour ceasefire on Wednesday, only hours before its push from the northern part of al-Mallah into the south. The Assad regime did not explain the contradiction between the announcement and its latest attacks.

Aleppo city has been divided since July 2012, with the opposition holding much of the eastern section despite sustained Russian and regime bombing and the threat of siege.

US: “Violence Broadly Reduced” During Ceasefire

The US Government avoided detailed comment on developments on Thursday, preferring to cling to the supposed ceasefire.

Today’s the second now of three days of the recently announced period of calm for Eid in Syria. Violence thus far we assess has been broadly reduced, showing us that it is possible for both sides to refrain from aggression when they choose to do so.

Kirby did mention that “the regime appears to be continuing to pursue an offensive military plan in violation of the calm they themselves have announced”. However, he continued:

Broadly speaking, despite these violations…the level of violence has been reduced in the first 48 hours of this 72-hour period. And of course, we welcome that reduction in violence.

The death toll from Tuesday’s suicide bombing in Hasakah in eastern Syria has risen to 28, with 29 wounded.

The Islamic State claimed the attack. The bomber, riding a motorcycle, blew himself up among a crowd of people gathered in front of a bakery in the Kurdish neighborhood of al-Salihiya. 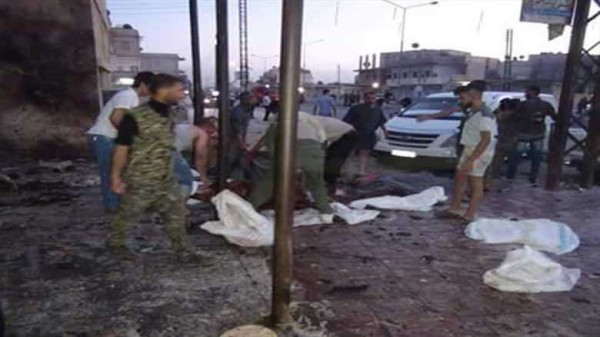 Activists reports that regime airstrikes on Friday have killed at least 15 people and wounded 30 in Darkoush, west of Idlib city in northwest Syria. 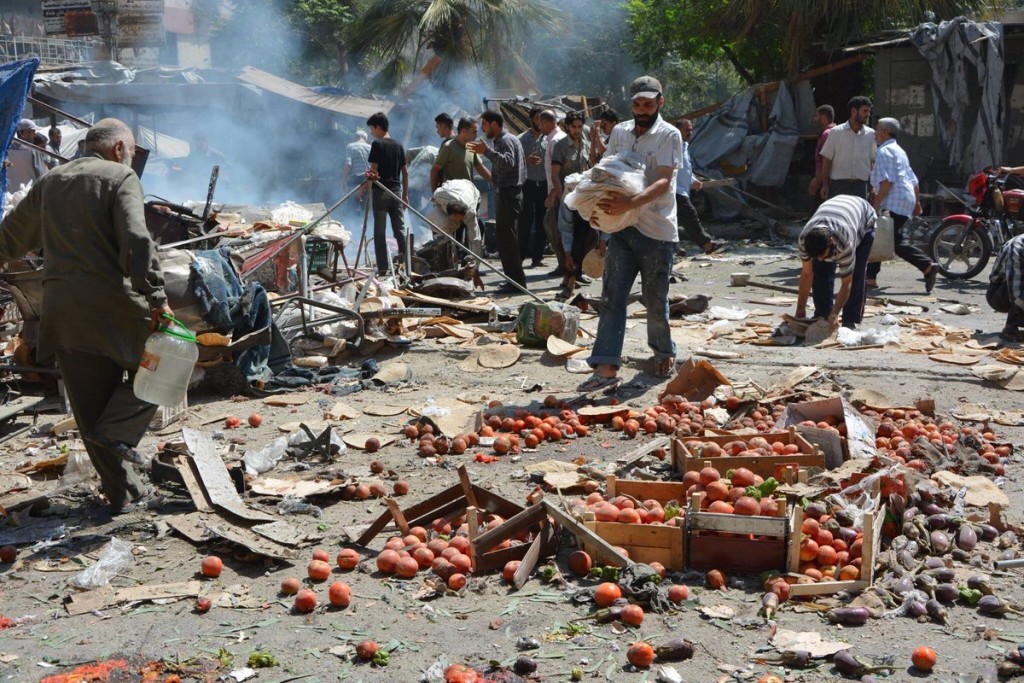 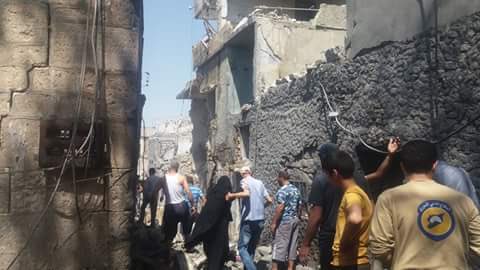 A man comforts his injured son: 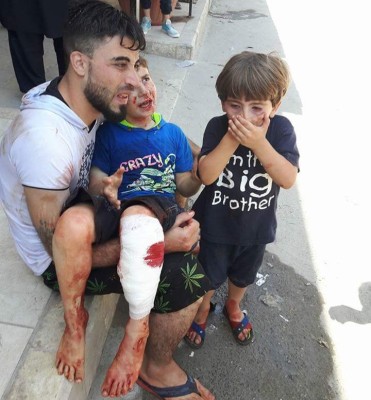 The rebel faction Jaish al-Islam fighting in the town of Maydaa in East Ghouta, near Damascus, from regime attacks this week:

Jaish Al-Islam claimed regime troops and allied militia were killed as they tried to advance near the Damascus-Homs highway. It said that rebels had recaptured several points in Maydaa after heavy clashes.

Meanwhile, regime forces continued to shell towns such as Douma with rockets and artillery.

The Syrian military and its allies have taken much of the southern part of East Ghouta in an offensive this spring, aided by rebel defenses weakened by in-fighting between Jaish al-Islam and other factions.

A photo of 13 regime troops and 1 Hezbollah fighter who have been captured in the Qalamoun region: 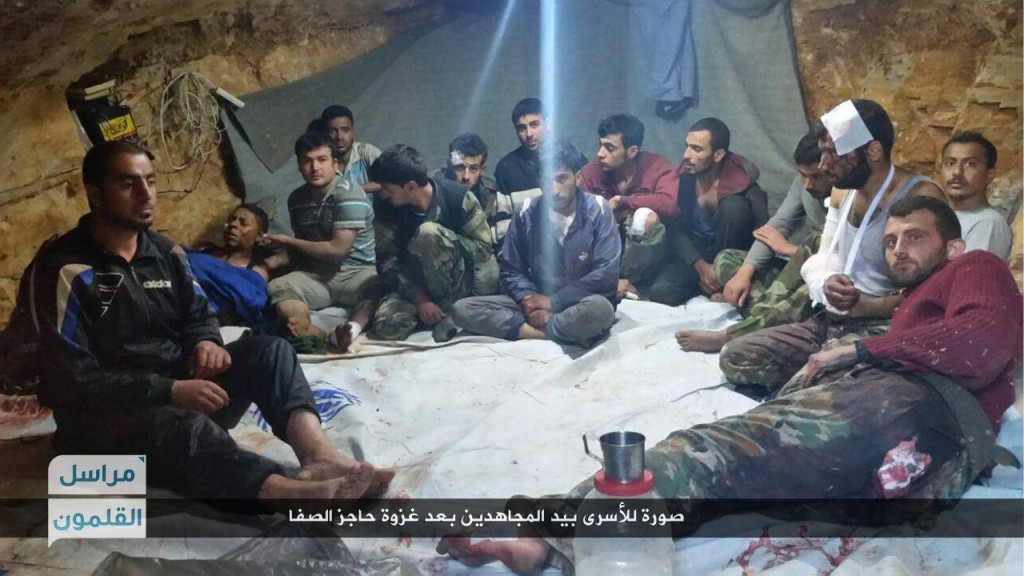 The soldiers were seized on Thursday when rebels and the jihadists of Jabhat al-Nusra overran the Safa checkpoint was overrun in western Qalamoun, near the Lebanese border. The attackers reportedly captured a T-55 tank as well as heavy weapons and AK-47s.

The Syrian military has launched an attempt to retake Kinsabba, a key town in Latakia Province that was captured by rebels last week.

The rebel “Yarmouk Offensive” last week regain territories in the mountains of Jabal al-Akrad and Jabal Turkmen, near the Turkish border. Kinsabba is significant because of its proximity to opposition-held Idlib Province.