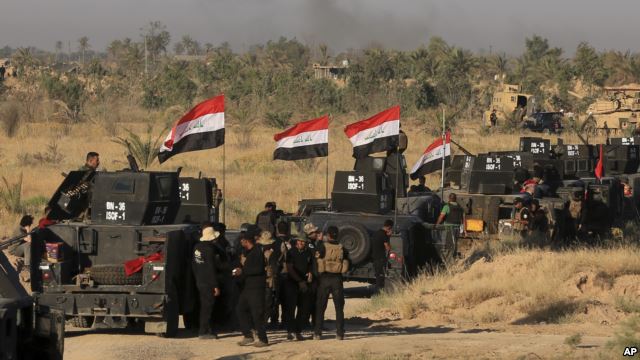 Iraq’s Prime Minister Haider al-Abadi has ordered a halt to the offensive against the Islamic State in the city of Fallujah, two days after operations were launched.

“It would have been possible to end the battle quickly if protecting civilians wasn’t among our priorities,” Abadi told military commanders at the operations room near the frontline, in footage shown on State TV.

“Thank God, our units are at the outskirts of Falluja and victory is within reach,” he declared.

About 65 km (40 miles) west of Baghdad, Fallujah is the Islamic State’s most significant position in Anbar Province, following counter-attacks by the Iraqi military and allied forces that regained cities such as the provincial capital Ramadi last December.

The offensive by the Iraqi army and mainly-Shia militias has made little progress since Monday’s launch, amid heavy resistance by the Islamic State, which is estimated to have about 1,000 fighters in Fallujah. Iraqi forces are maintaining positions in the southern suburb of Naimiya.

Almost 50,000 civilians, including 20,000 children, are still believed to be inside the city. The Iraqi army called on them to leave before the offensive, but few have been able to flee.

“We are concerned over the protection of children in the face of extreme violence,” the UNICEF Representative in Iraq, Peter Hawkins, said in a statement.

“Children face the risk of forced recruitment into the fighting” inside the besieged city, and “separation from their families” if they manage to leave, he declared.

The World Food Program said the humanitarian situation in the city was worsening as family food stocks were depleting, pushing prices to levels that few can afford.

“The city is inaccessible for assistance and market distribution systems remain offline,” the WFP said. “The only food available does not come from the markets, but from the stocks that some families still have in their homes.”