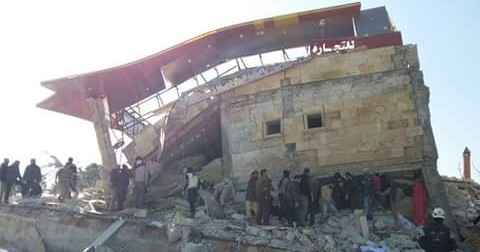 Amnesty’s documentation follows reports by Medecins Sans Frontieres and Physicians for Human Rights on the attacks.

Moscow has hit at least 27 facilities since it began bombing on September 30. Attacks last month on hospitals, clinics, and a school in Maarat al-Num’an in Idlib Province and Azaz in Aleppo Province killed about 50 people.

Russian and Syrian government forces appear to have deliberately and systematically targeted hospitals and other medical facilities over the last three months to pave the way for ground forces to advance on northern Aleppo, an examination of airstrikes by Amnesty International has found.

Even as Syria’s current fragile ceasefire deal was being hammered out, Syrian government forces and their allies intensified their attacks on medical facilities.

Amnesty has gathered compelling evidence of at least six deliberate attacks on hospitals, medical centres and clinics in the northern part of the Aleppo Countryside governorate in the past 12 weeks. The attacks, which killed at least three civilians including a medical worker, and injured 44 more, continue a pattern of targeting health facilities in various parts of Syria which amounts to war crimes.

All of the people interviewed by Amnesty said that there were no military vehicles, checkpoints, fighters or front lines near the hospitals that were attacked, and that the hospitals were exclusively serving their humanitarian function.

Amnesty researchers spoke to medical workers from the six medical facilities and several humanitarian organisations in Turkey and Syria, who described their struggle to cope with the high number of civilians in need of medical treatment following an escalation of airstrikes on the area in February. Several medical workers from the city of Anadan and town of Hreitan, north-west of Aleppo, told Amnesty that the Syrian government’s strategy is to empty an entire town or village of residents by targeting hospitals and infrastructure to facilitate the ground invasion.

A doctor from Anadan said:

Hospitals, water and electricity are always the first to be attacked. Once that happens people no longer have services to survive. This is what happened in Anadan. By mid-February most of the residents had fled the city after the field hospital and medical centre were attacked on 2 February. The field hospital is barely operating and the centre closed. The problem is that not everyone is able to leave. The ones who stayed behind are elderly people who are in desperate need of medical treatment.”

Syrian and Russian forces have been deliberately attacking health facilities in flagrant violation of international humanitarian law. But what is truly egregious is that wiping out hospitals appears to have become part of their military strategy.

The latest string of attacks on health facilities north of Aleppo appears to be part of a pattern of attacks on medics and hospitals, a strategy that has destroyed scores of medical facilities and killed hundreds of doctors and nurses since the start of the conflict.

Hospitals in opposition-controlled areas around Aleppo became a primary target for the Russian and Syrian government forces. This eliminated a vital lifeline for the civilians living in those embattled areas, leaving them no choice but to flee.

The injured and sick people are stranded at the Turkish border or dying inside Syria because hospitals have become the new front line in the offensive on the northern part of the Aleppo Countryside governorate. There is no excuse for a government to prevent people from accessing medical care. There is no excuse for deliberately targeting hospital after hospital.

Pattern of Attacks on Medical Facilities

According to the Syrian Network for Human Rights, a local monitoring group, at least 27 hospitals, including eight in Aleppo governorate, have been targeted by Russian and Syrian government forces since last September. The Syrian American Medical Society told Amnesty that since December at least 13 hospitals had been targeted in Aleppo by airstrikes and one by a surface-to-surface missile on 15 February. A total of four medical staff workers and 45 civilians were killed in these 14 attacks. Physicians for Human Rights has reported that, since the conflict began, at least 346 attacks on medical facilities have been carried out by parties to the conflict, with 705 health workers killed. Syrian government forces and their allies have been responsible for the overwhelming majority of these.

Amnesty’s researchers focussed on six attacks in northern Aleppo between December 2015 and February 2016.

During the last week of January, Syrian government forces supported by Russian airstrikes began a ground offensive in the northern part of the Aleppo Countryside governorate to break the siege imposed by armed groups on the towns of Nubul and Zahraa. This cut off the supply route from both this area and Turkey to Aleppo city. On 1 February, the Syrian government forces and the Syrian Democratic Forces, which include Kurdish, Arab and Assyrian groups, continued their offensive in the same area. Civilians who fled the northern part of the Aleppo Countryside governorate to the Bab al-Salam border crossing into Turkey told Amnesty that Russian and Syrian government airstrikes escalated in the first week of February, forcing thousands of people to flee. With no functioning hospitals left in the area, many of those injured in the airstrikes were forced to drive for hours to obtain medical help. Interviews with doctors and medical workers in and around Aleppo indicate that health facilities were among the first buildings targeted in a series of airstrikes at the start of the offensive, which they believe were intended to prevent the injured from receiving medical treatment.

The Attacks on Tel Rifaat

Two doctors and an activist from the city of Tel Rifaat left two days before the People’s Protection Unit (YPG), part of the [Kurdish-led] Syrian Democratic Forces, took control of the town on 15 February. They told Amnesty that all three health facilities — including a field hospital, a rehabilitation center and a kidney dialysis center — were directly targeted by missiles during the week of 8 February, just as the ground offensive on the town began. The attacks injured six members of the medical team and three civilian patients, leaving the population with no working medical facility. Doctor “Faraj” (his real name has been withheld for security reasons), who manages the field hospital, rehabilitation and kidney dialysis center, told Amnesty:

The Kurds started gaining control of some villages in the northern part of Aleppo Countryside at the beginning of February and they were advancing towards Tel Rifaat. As they approached, Russian and Syrian forces targeted medical facilities. As a result, the civilians injured from the indiscriminate shelling had to be transferred to the Syrian-Turkish border because the hospitals were no longer operational.

Several weeks before the current offensive, at 2:45 pm on December 19, a direct airstrike destroyed a center in Tel Rifaat which provided medical care for children with special needs. According to the center’s manager, it had been set up in 2014 and received 250 children per month from all over the northern part of Aleppo Countryside.

A doctor from the Independent Doctors Association in Turkey told Amnesty that the field hospital they support in Maskan, a village in the northern part of Aleppo Countryside, had to be evacuated on February 1 because of intensifying airstrikes and an imminent ground invasion of the village. A day after medical staff and patients evacuated, the IDA received images of the field hospital destroyed by an airstrike. The Syrian government gained control of the deserted village on February 15. Amnesty reviewed the images of the destruction and a video of government forces inside the field hospital claiming that the facility was used by terrorists to treat the war wounded. International humanitarian law protects hospitals and health facilities carrying out their humanitarian function, including providing medical treatment to wounded fighters.

Doctors and a medical worker in Anadan told Amnesty how two airstrikes on January 27 and February 2 by Russian or Syrian warplanes partially destroyed a field hospital and rendered a rehabilitation center out of service. A physiotherapist at the rehabilitation centre said:

The airstrikes intensified on February 1. The next day at 8:30 am the centre was targeted by a missile. I was on my way to work when I saw and heard the explosion. When I arrived I saw the driver’s body at the entrance, two patients and five from the medical team severely injured. We had to transfer them outside of Anadan. Now the centre is out of service. We lost a lot of expensive equipment. We provided treatment to whoever is in need and we have been operating since 2014.

Baghdad Hospital in Hreitan was directly targeted on 25 December and severely damaged. A doctor and another medical worker at the hospital told Amnesty that a Russian or Syrian warplane fired missiles directly at the hospital, injuring ten medical staff and at least 20 civilian patients, leaving the facility in ruins. Medical worker Ali Hamedo was killed by the strike. The hospital has been unable to function since.

Not even underground hospitals are safe. We moved the hospital underground a year ago assuming that it will be protected from the airstrikes. But the missiles were able to penetrate the underground levels. We have spent hundreds of thousands of dollars to equip the hospital and provide treatment to the injured and sick but now Hreitan has no more hospitals.

A family from Hreitan who fled the attacks on February 6 told Amnesty that they were the last ones to leave. The father said:

I have lived in Hreitan all my life and I have never seen it deserted. Very few families remained because they can’t leave the city. The airstrikes destroyed the city’s infrastructure including hospitals so there are no more services for us to be able to survive.

According to the Russian Ministry of Defense, Russian warplanes carried out strikes on “terrorists’ objects” in Aleppo between 4 and 11 February but denied targeting civilians. The Russian authorities continue to deny killing any civilians or damaging any civilian infrastructure in Syria, despite strong evidence indicating many hundreds of such deaths and multiple attacks on civilian buildings. On February 11, the Russian Ministry of Defense accused the US-led coalition of being responsible for the attacks on the northern part of Aleppo Countryside, an accusation denied by the USA. According to the US Central Command, the US-led coalition carried out strikes on the Islamic State armed group in Mar’a in the northern part of Aleppo Countryside between February 1 and 4.

Deliberate attacks on civilians not directly participating in hostilities and on civilian objects, including hospitals and other medical facilities, violate international humanitarian law and amount to war crimes. Under the laws of war, hospitals and medical units enjoy special protection. They only lose their protection from attacks if they are being used outside their humanitarian function to commit “acts harmful to the enemy” such as to store weapons. Even in the case of such misuse, a warning has to be issued setting a reasonable time limit and an attack can only take place after such a warning has remained unheeded.