Syria Daily, March 5: The Revival of Opposition Protests Across the Country 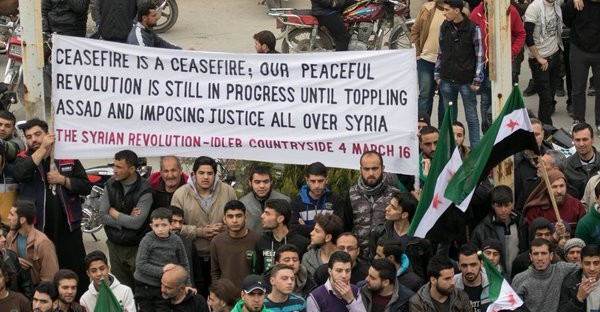 The largest opposition protests in Syria in months took place on Friday across the country.

From Idlib and Aleppo Provinces in the northwest to the Damascus suburbs to southern areas along the Jordanian border, rallies — some with thousands of marchers — were held to claim “The Revolution Continues” against the Assad regime.

Demonstrators flew the flags of the Syrian Revolution and held posters such as “Syria is Beautiful but It’s More Beautiful Without Assad”.

With the ceasefire in parts of Syria, marchers were able to take to the streets without fear of regime or regime bombardment. More mass demonstrations are promised by the opposition and activists to press for the removal of President Assad.

The rally in Saqba near Damascus:

The Roman amphitheater in Busra al-Sham in southern Syria:

Abda, 48, founded the opposition Justice and Building Movement in the United Kingdom, which is an opposition movement against Assad’s regime. He was also head of the Damascus Declaration Group among the diaspora. 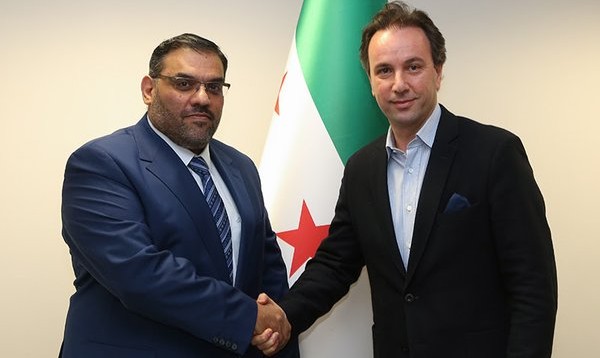 A Free Syrian Army unit has captured a crossing on the Iraqi border from the Islamic State.

The Battalions of Martyr Ahmed al Abdo occupied the al-Tanf border crossing, about 150 miles (220 km) east of Damascus. It had been held by ISIS since its advance across eastern and central Syria in May 2015.

The Battalions said they captured a depot with dozens of explosive devices and weapons.

Rebels are hoping to advance against Islamic State forces near the the desert town of Dumayr.

According to German Chancellor Angela Merkel, Russian President Vladimir Putin has said that Moscow is committed to observing a cessation of hostilities that began in Syria last weekend.

The leaders of France, Britain, Germany, and Italy had a teleconference conversation with Putin on Friday.

“I would like to stress one more time that the commitment to hold the ceasefire was confirmed as a key message by the Russian president: only attacks on Daesh [the Islamic State] and al-Nusra Front,” Merkel said during a news conference with French President Francois Hollande.

The Syrian ceasefire must be respected everywhere and that the only actions which should be tolerated are those directed against ISIL [the Islamic State] and al Nusra.

Any other initiative would violate the cessation of hostilities and be a pretext to not fully implement it.

The coordinator of the opposition-rebel High Negotiations Committee, former Prime Minister Riad Hijab, said on Friday that the ceasefire was on the point of collapse because of continuing Syrian military attacks and Russian bombardment.

The leading rebel faction Jaish al-Islam denied Russian claims that it had accepted a ceasefire agreement with the Assad regime, as warplanes continued to attack the Damascus suburb of Douma, where the group is based.

The Russian Defense Ministry and Moscow’s “center of reconciliation” had spread the assertion that Jaish al-Islam and five “leaders of the moderate opposition groups” had laid down arms.

However, the faction said, “Jaish al-Islam refutes the news…which talks about inclusion of our forces in al-Ruhaybah town in east Qalamoun in the ceasefire agreement”.

A “double-tap” airstrike, hoping to kill rescuers as they gather after the first attack, on Douma on Friday:

3 airstrikes on Douma today, between 12:04-12:30pm. One was "double tap" to kill rescue workers. #SyriaCeasefire pic.twitter.com/n9xdI5i9Ce