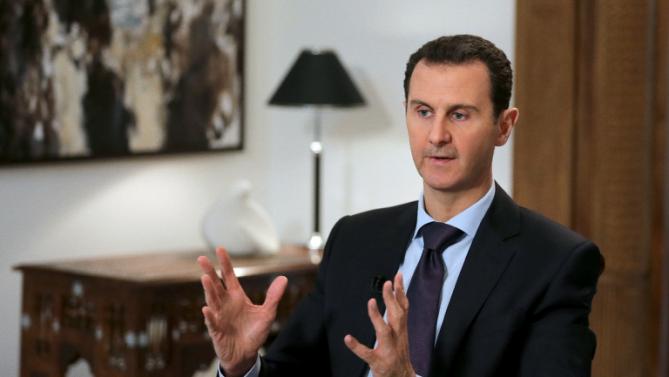 PHOTO: President Assad in an interview with AFP, February 11, 2016

In a rare public speech, Syria’s President Assad has rejected international pursuit of ceasefires and a transition which would end his rule.

Buoyed by recent advances of foreign-led regime offensives and Kurdish attacks against rebels in northwest Syria, Assad spoke to lawyers of the Central Bar Association on Thursday night. He repeated his claims that protests from 2011 were a foreign-backed insurrection and that there could be no halt to fighting without total defeat of Syrian rebels: “When gunmen suffer, when they are defeated, the term cease-fire happens between armies and states, but it doesn’t go between a state and terrorists.”

The President also indicated that he would not leave power, despite the international efforts for a political transition.

Another point is differentiating between the State and the [Assad] regime….Unfortunately, until now, the pro-State media or the pro-Government media talk about the concept of regime and this is a dangerous issue, the word of regime, when used, it is an insult, not only for the government, but it is an insult for the people.

He declared of the international conferences, “The primary game is political, still dubbing it a ‘political solution’ in an attempt to give the impression, first to their local public opinion, that they are peaceful states which pursue peaceful policies in Syria.”

In its latest gathering last week in Munich, the 17-nation International Syria Support Group — including Syria’s main allies Russia and Iran — declared the pursuit of a “cessation of hostilities”. The effort is an attempt to renew talks between the regime and the opposition-rebel bloc, who have rejected discussions without ceasefires and access to aid for besieged areas.

UN envoy Staffan de Mistura suspended talks in Geneva earlier this month after less than five days, with no success in achieving “proximity talks” between the regime and the opposition-rebel delegation. He scheduled a resumption for February 25.

However, Assad gave a lengthy rejection of the international process, indicating that the regime had only participated at times to undermine it:

This political track was used to provide cover for their Syrian agents to cast them as a group of peaceful politicians who want to bring deliverance to the Syrian people who are suffering from oppression, killing and lack of democracy, etc….

Unconsciously, people would consider a political solution as a substitute for a military one, so that they do not notice that they run in parallel.

Fully knowing their bad intentions, we have been receptive to all political initiatives so as to halt them in their tracks.

He specifically rejected the “transitional governing authority”, proposed by international conferences since 2012: “Each sect seeks to strengthen its own position by seeking external support until the homeland becomes depended on external sides.”

Assad also indicated that he would not accept any process for a new Constitution and elCctions: “There might be a Syrian-Syrian dialogue to reach a specified thing, but if this will target or harm the constitution and exceeds the capacity of the government, there should be a referendum, and in this case each Syrian citizen will be a contributor to this issue.”