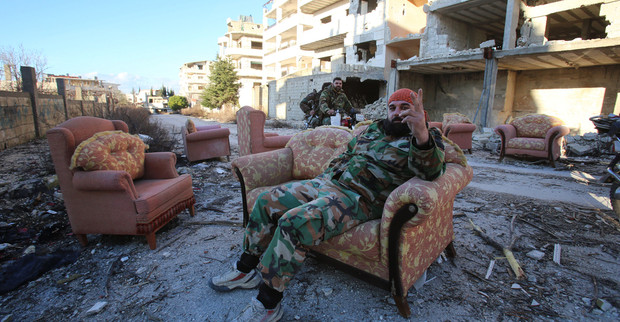 PHOTO: A regime soldier sits amid the devastated town of Salma in Latakia Province, January 15, 2016 (AFP)

“It’s like Stalingrad. They raze entire areas. Then they send in the militias,” says Yamen Ahmad, a Free Syrian Army commander in Latakia Province in western Syria.

Ahmed was in Selma, Latakia province, leading his brigade when the Assad regime took back the area from the opposition in January. He says Moscow’s intervention was decision: “There is no way to resist this scorched earth policy the Russians are deploying with their strikes across Syria.”

Since Russia began its strikes in Syria on 30 September, the Assad regime has been able to make some gains across the country. Moscow initially declared that its military goal was to defeat the Islamic State, but the evidence is that the main objective of their strikes is support of regime-Iranian-Hezbollah ground offensives against rebels. 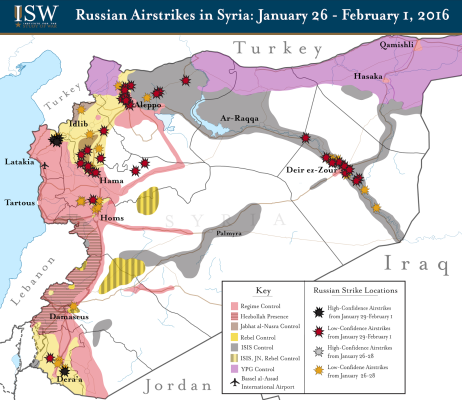 (Graphic: Institute for the Study of War)

While the Syrian military and the Islamic State are fighting in eastern Aleppo Province, in the north their frontline is a de facto safe zone as they both focus weaponry on opposition forces. As one media activist observes, “During the north Aleppo offensive, not a single Russian bomb has hit ISIS — not a single ISIS attack hit Assad’s front.”

Osama Abu Zeid, a legal advisor to the Free Syrian Army, returned from Syria last week. He describes how Russian strikes are hitting FSA forces while they fight ISIS in the northern Aleppo countryside. He describes the frontline between ISIS and the regime as “entirely peaceful”.

In the fronts in Latakia, Aleppo, and Daraa in southern Syria, the regime was not able to make headway until the start of intense Russian airstrikes which paved the way for pro-Assad forces largely composed of foreign militia.

FSA commander Ahmad says 75% of regime forces in the Salma offensive were foreigners. Orders on intercepted radio communications were in Persian while the chatter between forces was in an unrecognizable language that Ahmad described as “from mid-Asia”.

After more than three months and about 800 Russian airstrikes, regime forces finally captured the town of Sheikh Miskeen in Daraa Province on January 26.

A Russian agency posted a video, titled “Dead City Sheikh Miskeen”, which captured the grim aftermath of the operation with its devastation.

The FSA Southern Front said the operation was “not a success story for the regime but a demonstration of how much it relies on Russia as its air force, and on foreign militia as its ground troops to re-control areas of the country.” Al-Reis commented: “The reality is that regime is not able to reclaim one meter of land without Russia fully destroying the area with its strikes.”

The military strategy in Salma parallels that in Sheikh Miskin. Yamen Ahmad describes how the regime had tried to take the area from the opposition for more than three years. There had been more 50 battles but with little regime success.

Then the Russians intervened. “They burned the entire area,” he said. In 40 hours, there were more than 150 airstrikes, in addition to 1,500 Grad rockets: “There was no way to resist this fire power.”

By the end of the operation, around 80 percent of buildings in the area had been damaged or destroyed. “You can barely find a building that is untouched by these strikes,” Ahmad notes.

In the battle for nearby al-Noba mountain, Russian bombing was so heavy that “no tree had been left standing, the mountain was totally burned”. About 25 airstrikes bombarded an area of 1 square km. Cluster bombs and an unidentified weapon scorched entire areas: “Everything it touched turned completely black”.

(Pro-regime graffiti: “Bashar al-Assad or We Burn the Country”)

Aleppo has the same story. Osama Abu Zeid described the recent case of the village of Rityan in northern Aleppo countryside, with a battle starting with eight hours of Russian air strikes. Hezbollah, Iranian, and Afghan units failed to enter the village so there were another 12 strikes. Again the militia’s ground operation failed, so Russia carried out another 10 airstrikes until FSA forces withdrew.

“Any areas are taken over solely because of the Russian strikes” and only after “total destruction”, says Abu Zeid.

Once regained, civilians cannot return; the extent of the destruction makes the areas inhabitable: “Who wants to live in piles of rubble?” al-Reis asked me. Sheikh Miskeen is now empty. So is Salma. 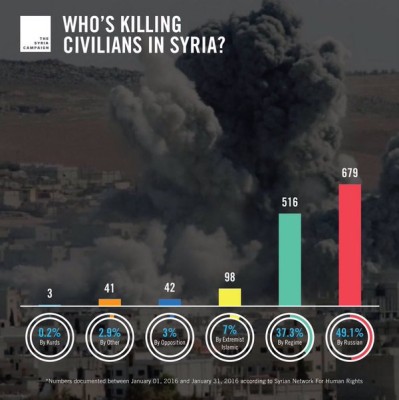