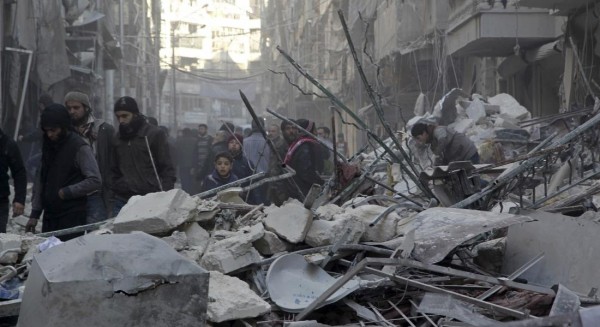 PHOTO: Aftermath of a Russian airstrike on the al-Shaar area of Aleppo city, January 4, 2016

The United Nations has warned that 300,000 people in opposition-held areas of Syria’s Aleppo city could be besieged, as a regime-Russian-Hezbollah-Iranian offensive threatens to block all supply routes from the north.

The Office for Coordination of Humanitarian Affairs said on Tuesday, “[The offensive] would leave up to 300,000 people, still residing in the city, cut off from humanitarian aid unless…access could be negotiated.”

The OCHA added that “local councils in the city estimate that some 100,000 to 150,000 civilians may flee”, adding to the up to 70,000 people who have moved towards the Turkish border in the past week.

Intense Russian airstrikes and a ground offensive with Iranian forces, Hezbollah units, and foreign militias have taken territory north of Aleppo this month. The advance could block all supplies between the city and the Turkish border.

The people here in Aleppo are scared….What will happen to the cost of living to citizens like me? How can they afford [to buy] heating fuel when the prices keep doubling and quadrupling every day. How will we face this?

Zaid Muhammad, a volunteer for the Syrian activist group Kesh Malek, added, “For seven or eight hours a day they [Russian warplanes] are invading the skies and terrorizing the people psychologically.”

Once Syria’s largest city, Aleppo has been divided since rebels took over parts of the city in July 2012.

With the prospect of more displaced civilians, the UN’s refugee agency UNHCR called on Turkey to open the border to the tens of thousands gathered near the Bab al-Salama crossing.

UNHCR spokesman William Spindler praised Ankara for allowing in wounded refugees and for establishing camps and providing assistance to those on the Syrian side.

However, he said Ankara needs to “extend the opening of the border to others in need of protection and fleeing danger”.

Turkish leaders have said that the newly-displaced people must be supported; however, they had held out against the opening of the border crossing.

The Obama Administration has shown continued concerns over reported remarks by Secretary of State John Kerry last week blaming the opposition for the breakdown of the Geneva talks.

Two aid workers said that, at a reception on Thursday in London, Kerry said it “was the opposition that didn’t want to negotiate and didn’t want a ceasefire”. He also declared that Russia would continue bombing for another three months, decimating those challenging the Assad regime.

On Tuesday, the Administration’s special envoy for Syria, Michael Ratney, issued a statement, “Beware of sensationalist reports of Secretary Kerry’s or other officials’ remarks in closed meetings, as reporting on these meetings is often distorted, purposefully or otherwise”.

However, another source who was in the London meeting confirmed to EA last night that the original account of Kerry’s comments is accurate.

Opposition: End to Bombing and Sieges Essential for Talks To Resume

The opposition-rebel bloc has repeated that Russian and regime bombing must stop and sieges on towns must be lifted if there are to be “proximity talks” with the regime in Geneva.

“Before we go on February 25, those measures should be implemented in reality on the land,” Riad Hijab, the coordinator of the opposition High Negotiations Committee, told reporters in London after a meeting with British Foreign Secretary Philip Hammond.

“Russia and the regime are deliberately targeting the opposition and thus strengthening Daesh,” he said. “Their actions against civilian populations and infrastructure are in breach of international humanitarian law.”

Russia: Hurry Up US, Accept Our “Peace Plan”

On the eve of an international meeting in Munich, Russian Foreign Minister Sergei Lavrov has pressed the US to accept Moscow’s proposals for a supposed resolution to the Syrian conflict:

During our contacts with Washington, we have proposed an absolutely concrete plan which they are now studying….I hope the simple proposals the plan contains will not take too much time for Washington to consider.

Lavrov’s statement was part of the Foreign Ministry’s effort to blame the opposition-rebel bloc for the failure of last week’s Geneva talks, undermined by Russian bombing, Syrian military sieges, and a regime-Iranian-Hezbollah offensive in northwest Syria:

They’ve tried to turn the humanitarian situation in Syria into almost a measure of the ability to take further steps towards reaching a political settlement, making its resolution a preliminary precondition for starting any meaningful talks between the Syrians.

The 20-nation International Syria Support Group meets in Munich on Thursday to consider the state of the proposed talks, with UN envoy Staffan de Mistura suggesting a resumption on February 25.

Syria’s UN Ambassador Bashar al-Ja’afari, the regime’s lead negotiators in Geneva, backed up Lavrov: “[The opposition-rebel bloc] didn’t go for the sake of dialogue, but rather to foil it by setting preconditions. They knew in advance that things would go into a stalemate.”

Lavrov repeated the criticism on Tuesday by pushing back the possibility:

I don’t think it might ever happen. Minor provocations about which I have told are not a full-scale intrusion after all.

I don’t think the coalition led by the Americans and having Turkey as its member will let realize such crazy plans.

Turkey is wary of advances by the Syrian Kurdish YPG, linked to the Kurdish Democratic Union Party (PYD), near the border, as well as the threat of the Islamic State. However, high-level Turkish officials have said ground troops will not enter Syria.

Turkish operations have been limited to mine-clearing operations and occasional artillery fire on the Islamic State across the border. Turkey aid organizations have also established new tent camps just inside Syria for the latest surge in displaced persons, fleeing Russian bombing and the regime-Hezbollah-Iranian offensive in northern Aleppo Province.

Lavrov also returned to Moscow’s declaration of Turkish links with ISIS, such as trade in oil:

There are indications that the leadership of the Islamic State keeps secret contacts with Turkish officials.

They are discussing alternative options in the current circumstances, when the strikes of our aerospace forces have seriously limited the possibilities of traditional smuggling routes.

Turkey has repeated its challenge of US support for the Syrian Kurdish Democratic Union Party (PYD) and its military wing YPG.

Foreign Minister Mevlut Çavuşoğlu issued the latest statement on Tuesday, “Our friends and allies need to make their minds up. Are we [one of] the partner countries in Syria in the fight against Daesh [the Islamic State] or are terror organizations?”

Turkey considers the PYD as an effective front for the Turkish insurgent Kurdistan Workers’ Party (PKK), which is designated as a “terror organization” by Turkey, the European Union, and the US.

On Monday, US State Department spokesperson John Kirby repeated that Washington does not consider the PYD as “terrorist”: “Even the best of friends aren’t going to agree on everything. Kurdish fighters have been some of the most successful in going after Daesh inside Syria.”

Since last October, the US has shifted its support from Syrian rebels to Kurdish-led organizations such as the Syrian Democratic Forces, providing arms, ammunition, and special forces. Earlier this month, President Obama’s envoy in the anti-Islamic State campaign, Brett McGurk, met Kurdish officials in northern Syria.

Turkish President Recep Tayyip Erdoğan denounced the visit, “[McGurk] receives a plaque from a so-called general in Kobane. How will we trust you? Am I your partner or are the terrorists in Kobane?”

On Tuesday, the Turkish Foreign Minister called in the US Ambassador to protest the latest remarks from Washington.

Ignoring such force as the Kurds is a dead-end road, a complete lack of understanding of this factor. Or vice versa — the understanding and unwillingness to involve it in the political process.

So I think that the United States, realizing that progress is only possible with the availability of the full array of relevant factors, has made an appropriate choice and began to move forward.

Foreign Officials: US “Blinded to Threat from Russia and Iran”

The Washington Post reports discontent among American allies over Washington’s approach to the Syrian conflict, as Russia and the regime undermine the notional “peace talks” with sustained bombing, ground attacks, and sieges:

US ties have become strained with partners closer to the conflict. These allies fear the Obama administration has been blinded to the threat from Russia and Iran by its desire to believe they can be swayed by diplomatic reason and appeals to shared worries about expansion of the Islamic State.

One senior official from a close partner nation described the negotiation track as a farce. The official said that it was unrealistic to expect the opposition to come to the table when its forces are being decimated on the ground and civilians are being starved by Russian bombing and the government gains it has enabled, in violation of United Nations resolutions that Moscow agreed to in order to get the talks started. The official, who said that U.S. leadership is still essential if the war is to end, did not want to be identified by name or nationality in order to speak candidly.

The German Ambassador to the US, Peter Wittig, carefully expressed the concerns:

There are fault lines emerging that we thought we had overcome.

The United States has been slow to recognize this is a much bigger thing than anything else we’ve experienced since the beginning of the European Union. We didn’t see it earlier, we were totally unprepared….

We’re not blaming the United States. It takes time for this country to realize that it’s really that serious.

US Secretary of State John Kerry insisted on Tuesday, “We are not blind to what is happening. We are all very, very aware of how critical this moment is.”