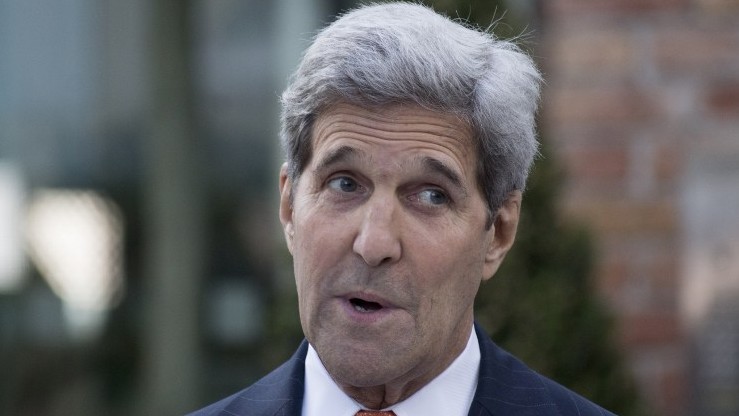 PHOTO: US Secretary of State Kerry: “What do you want me to do? Go to war with Russia?”

US Secretary of State John Kerry has blamed Syria’s opposition for the failure of the Geneva talks and said the country should expect another three months of Russian and regime bombing that will “decimate” resistance, according to aid workers.

The humanitarian staff said they spoke with Kerry on the sidelines of Thursday’s donors conference in London. A day earlier, UN envoy Staffan de Mistura suspended the Geneva discussions amid intense Russian bombing in support of a regime-Hezbollah-Iranian offensive in northern Aleppo Province.

“[Kerry] said, ‘Don’t blame me – go and blame your opposition,’” said one of the aid workers.

Officially, Kerry told reporters on Friday that Russia and Iran told him that they are prepared to halt operations in Syria. He insisted yesterday that the discussions had not failed but were “interrupted while modalities of humanitarian access and a potential ceasefire were worked out”.

See Syria Daily: Kerry — “Russia and Iran Told Me They Want A Ceasefire”

But the aid workers gave a different account of the drinks reception at the London conference. They told Kerry that he had not done enough to protect Syrian civilians.”

“He said that basically, it was the opposition that didn’t want to negotiate and didn’t want a ceasefire, and they walked away,” the second aid worker said.

The Secretary of State continued, “What do you want me to do? Go to war with Russia? Is that what you want?”

Kerry said he anticipated three months of bombing during which time “the opposition will be decimated”. His consolation was that he was “talking to the Russians” about airdrops for besieged Syrian towns.

On Saturday, as activists and analysts circulated the account by the aid workers, State Department spokesman John Kirby finally responded on Twitter: