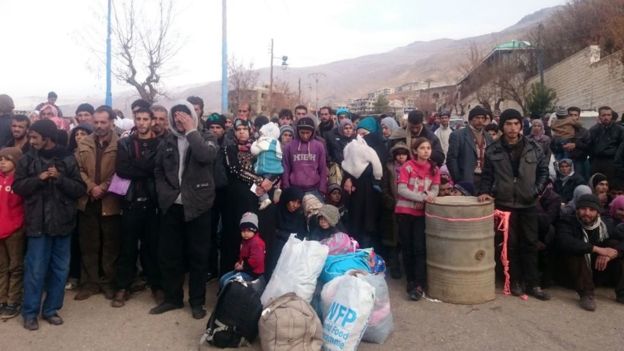 Vice News has spoken by Skype with the commander of rebel forces in the town of Madaya, northwest of Syria’s capital Damascus, where thousands of residents face starvation because of a six-month siege by the Syrian military.

A former baker, Abu Abdulrahman leads the local unit of Islamist faction Ahrar al-Sham. He was detained in 2005, as he tried to fight in Iraq. Sent to Sednaya prison, where the regime sent many Islamists, he became friends with Hassan Abboud, the future leader of Ahrar. He and Abboud were among the detainees released by the Assad regime in 2011.

Now Abdulrahman is in Madaya, cut off since Hezbollah and regime forces tried to overrun the nearby town of Zabadani last July. Despite a ceasefire deal in late September, the Syrian military maintained its blockade, allowing in only one aid delivery weeks later. Prices for food skyrocketed in the town, people were reduced to eating grass and leaves, and up to 75 people have reportedly died from starvation.

Although the Assad regime finally relented in the face of international attention and allowed three convoys into Madaya from January 11, the crisis continues. Sixteen people have died in the last three weeks, and the aid will soon be exhausted. The Assad regime is refusing evacuation of 400 at-risk patients, and blocking the entry of medical specialists.

See People Are Still Starving to Death in Madaya

Abdulrahman says he and the hundreds of rebels under his command have tried to surrender multiple times, but Hezbollah will not accept their terms. The commander first offered to leave, if the rebels retained their guns and were guaranteed safe-passage to opposition-held territory. Then, he said weapons would be given up, if the disarmed rebels were escorted out of town by UN officials. Finally he offered to stay in the town as “a police force” for the local community.

The commander has even sought a meeting with the Syrian army general in charge of the Qalamoun region, but he claims Hezbollah has blocked him from leaving the village.

Meanwhile, Abdulrahman is sceptical of any deal that moves out most of Madaya’s residents, estimated to be from 20,000 to 40,000: “These proposed evacuations would really change the demographics here. That’s something we are afraid of.”

Speaking about the rebels’ blockade of 12,500 people in two regime enclaves in northwest Syria, Abdulrahman says:

I am against any civilians being put under siege. Let me be clear, speaking for myself: I am against the Jaysh al-Fatah siege in Fu’ah and Kafraya.

He continues, “After the war, I hope we can live together: Alawites, Christians, Sunnis, and Shiites, in a state of law. Someday I hope we will get along, and things will be as they were before.”

And what of the claims from Russia and the Assad regime that rebels have caused the starvation by hoarding food?

Abdulrahman responds, “When Madaya goes hungry, we go hungry. These are vicious lies.”

He referred to his five children, saying that his youngest son is afraid to leave the house and go to school, and that he cries for hours on end when food runs scarce: “Can you imagine that? I am the commander, and even my child is starving.”

The international medical organization Medecins Sans Frontieres, which supports a field hospital in Madaya, supports the commander. It says rebels have not interfered with the dispensation of aid.

A female resident offers further testimony. She says that a supposed “protest” by women and children as aid was delivered was stage-managed by Russia and Hezbollah. Claiming that she was one of the women brought out of Madaya to a barricade, she says the group was told to condemn the rebels and praise President Assad in exchange for food and safe passage from the town.

Meanwhile, Abdulrahman prepares for more siege and struggle. He says he once “had so much respect for the way [Hezbollah] defended their homeland”. But now “I have to see Hezbollah as my enemy now: they cut down our trees and starve our children”.