Syria Feature: People Are Still Starving to Death in Madaya 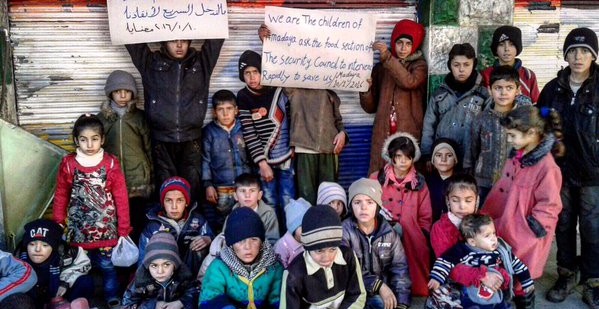 International attention has moved away from Madaya since three convoys of aid finally reached the town, northwest of Syria’s capital Damascus, earlier this month; however, residents continue to starve to death.

The medical humanitarian organization Médecins Sans Frontières said on Friday that at least 16 people have perished since the first convoy arrived on January 11, after the Assad regime briefly lifted a six-month siege because of publicity over the crisis.

MSF said another 320 people are suffering from malnutrition among about 20,000 residents. It said 33 of the cases are severe and life-threatening without prompt and effective treatment.

Up to 75 people have reportedly died from starvation since December 1. Others have been fired upon by regime snipers or risked landmines as they attempted to collect food from fields.

While the Assad regime allowed the three convoys — at the same time that assistance was sent to two regime enclaves in northwest Syria — it has refused the evacuation of 400 people whom doctors said were at risk of death. Only four patients, one of whom subsequently perished, were moved for treatment in Damascus. The Syrian military has also prevented medical specialists from entering Madaya.

Residents said that they had about a 10-day supply of food following the three aid convoys between January 11 and 18.

See Syria Feature: The “Ask Me Anything” Discussion With a Mother in Starving Madaya

“It is totally unacceptable that people continue to die from starvation, and that critical medical cases remain in the town when they should have been evacuated weeks ago,” said Brice de le Vingne, MSF’s director of operations.
“There needs to be a permanent and independent medical presence in Madaya immediately, as we expect the medical situation to worsen as access to health care for people inside remains extremely limited.”

MSF-supported medics are also reporting malnutrition in other towns in Syria, such as Moadamiyah, southwest of Damascus.

Scores of residents of Moadamiyah died in late 2013 amid a regime siege imposed a year earlier. While a ceasefire agreement was reached in January 2014, the Syrian military has maintained the blockade.

Activists said up to 1 million Syrians are in areas besieged by the regime forces. Another 200,000 are surrounded by the Islamic State in Deir ez-Zor Province in eastern Syria, and about 12,500 are in the regime enclaves of al-Fu’ah and Kafraya in Idlib Province.