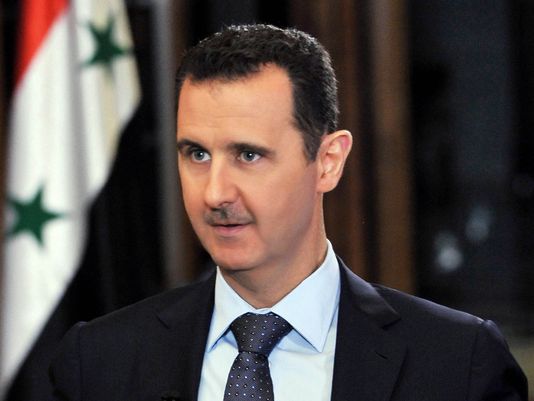 The Obama administration has set out a plan in which Syria’s President Assad will remain in power until March 2017 in a political transition.

The proposal is set out in an “internal timeline” in a document obtained by The Associated Press. The March 2017 date matches US aspirations and proposals developed for the international talks, fostered by Russian military and political intervention, that began in November.

US Secretary of State John Kerry has set a target date of late March for the start of an 18-month political transition including ceasefires, opposition-regime talks, a new Constitution, and elections.

In the initial international conference in Vienna, the US and partners proposed a six-month stay for Assad. However, with the Syrian regime’s allies Russia and Iran holding out against any commitment for Assad’s departure, the US extended the period to a year — March 2017 under Kerry’s desired transition.

The proposal from the last set of international discussions, in New York on December 18, makes no reference to Assad’s future.

State Department spokesman John Kirby played down the document on Wednesday, saying it was a “staff-level think piece” that is “preliminary and pre-decisional” and not “an official position”: “[This is] not an accurate projection of plans by the international community to effect a political transition in Syria.”

However, another US official acknowledged the timetable, although he said the target of Assad’s departure by March 2017 could slip further.

The international proposal from New York envisaged the start of opposition-regime discussions by the end of January. The goal is unlikely to be met amid disputes over which opposition and rebel groups are acceptable, continued Russian and regime bombing of opposition areas and assassination of rebel commanders, and Assad’s rejection of discussions until “terrorists” have been defeated.

The US proposal had foreseen opposition-regime talks leading to the formation of a “security committee” in April. Some regime officials and opposition and rebel leaders would be granted “amnesty” as a transitional governing body was created.

In May, the Syrian Parliament would dissolve, as the transitional governing body set out political reforms and nominated an interim legislature. An international donors’ conference to fund Syria’s transition and reconstruction.

By November, a new constitution would be drafted, with a referendum on the document in January 2017.

UN Gets Regime Agreement to Deliver Aid to Starving Madaya

The UN has announced that it will be able to deliver humanitarian aid to Madaya, following the consent of the Assad regime.

The organization will also be sending in assistance to the regime enclaves of al-Fu’ah and Kafraya, north of Idlib city in northwest Syria.

“The UN welcomes today’s approval from the Government of Syria to access Madaya, Fu’ah, and Kafraya and is preparing to deliver humanitarian assistance in the coming days,” a statement said.

See Starvation in Madaya — “Everything is Gone”

Activists and analysts had criticized the UN, including Secretary-General Ban Ki-Moon, for silence over the growing crisis in Madaya.

Amir Burhan, who runs a field hospital in nearby Zabadani just north of Madaya, said a UN official had responded to appeals for help by saying that all staff were on holiday from December 24 to January 5.

The Syrian Arab Red Crescent said on Thursday that it is “ready to deliver aid”, with a “convoy supported by international partners and UN agencies…being prepared” to enter Madaya and the two enclaves at the same time.

Video: On Frontline v. ISIS in Aleppo Province — “Putin is Helping Them”

Rami Jarrah of ANA Press reports from the rebel frontline against the Islamic State in northern Aleppo Province:

Asked about Russia’s claim that it is assisting Free Syrian Army units who are fighting ISIS, a rebel fighter replies:

We don’t want him to support us. We want him to take his planes out and get out of here….

We are able to finish off ISIS. He is helping ISIS by shelling us.

More Testimony About Threat of Starvation in Madaya

More testimony has been posted about the threat of starvation in Madaya, southwest of Damascus, where scores have already died in the town of 40,000 people.

Now see Syria Feature: Starvation in Madaya — “Everything is Gone”