Syria Daily, Jan 6: Threat of Starvation Grows for 40,000 in Madaya 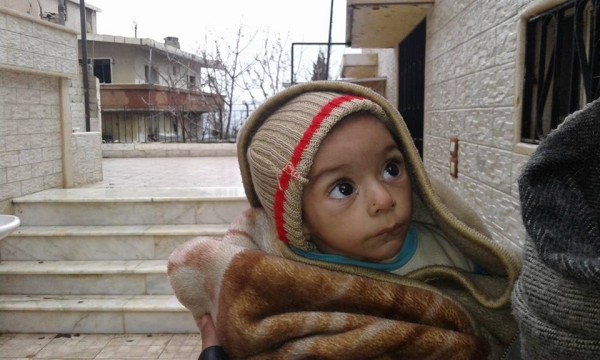 PHOTO: An infant in besieged Madaya, southwest of Damascus

More evidence was posted on Tuesday of the threat of starvation for about 40,000 people in opposition-held Madaya, southwest of Damascus, because of the Syrian military’s siege.

Residents inside the town, cut off by the Syrian military since last July, spoke by phone about the lack of food. Saying he had lost about 24 kg (50 pounds), a teacher confirmed reports and photographs that people are resorting to meals of grass and tree leaves:

I had strawberry leaves for dinner today. I haven’t had a real meal in three months….

Kids are eating leaves off the trees, and the very old and very young are dying.

The siege was imposed last summer as Hezbollah and regime forces tried to overrun nearby Zabadani, one of the first towns taken by the opposition in early 2012. The attacks were unable to quell resistance, and a ceasefire was agreed in late September. However, the Syrian military did not lift the blockade of Madaya, where many Zabadani residents had fled during fighting.

One of the displaced, a 52-year-old woman named Umm Mohamad said, “My only dream is to have a piece of bread.”

Local activists say more than 30 people have starved to death and hundreds of infants are at risk.
A kilogram (2.2 pounds) of rice reportedly now costs 3600 Syrian Pounds (about $90).

On Monday, reports said three civilians were killed and others wounded as they tried to flee the town, while Hezbollah fighters shot dead two men who were smuggling in food.

The town also has a shortage of medical staff and supplies — a veterinarian has now been pressed into service for operations.

See also Syria Feature: Threat of Starvation in Another Town Near Damascus

Regime supporters responded to the latest news with denial of any siege and claims that rebels, rather than the Syrian military, are preventing residents from leaving Madaya:

Madaya is not under attack or under siege. U.N. officials visited last week….they must have forgotten to report something….

UN Security Council resolutions have called for access for humanitarian aid, but the Assad regime has not lifted the restrictions, which opposition activists have called a “surrender or starve” policy. A resident spoke of the Syrian military’s response to a protest:

“We were about 1,200 people, and we took to the streets at 10 a.m., though most of us were exhausted and hungry,” Momina Abu Mesto [said]. When the marchers got within 100 yards of a Syrian checkpoint, “One of the soldiers prevented us from continuing our protest and threatened to shoot.”

Abu Mesto continued, “Three people from among the protesters, including myself, were allowed to talk with the officer in charge of the checkpoint, who promised us that flour will be brought in the town in the next few days.”

Despite the growing crisis in Madaya, there has been no sign of an international response — the town is still awaiting flour and other supplies that were supposed to be delivered last week by Red Cross teams who oversaw the evacuation of rebels and their families from Zabadani.

#Madaya isn't 1st to suffer #starvation siege, not last. Question is, how many more 10s of thousands will die before int'l action? #Syria

On Tuesday, Britain’s special representative for Syria, Gareth Bayley, called for action, “Starving civilians is an inhuman tactic used by the Asad regime and their allies. Sieges must be lifted to save civilian lives and to bring Syria closer to peace.”

The teacher in Madaya is not hopeful: “Sure, people may read about us if you write something. But when they finish reading, they’ll forget us.”

Graffiti from “soldiers of Assad”: “Bow Down or Starve” 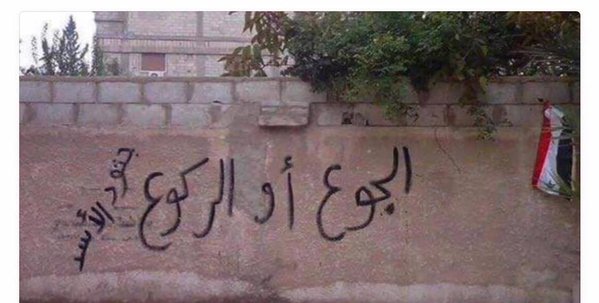 Claimed footage, sent to an Australian journalist by a doctor in of a child suffering from malnutrition:

Just got sent this video from a Dr who says he filmed this today in his clinic in the besieged town of #Madaya Syria pic.twitter.com/yxTvSS9A4E

What’s your name?
-Ahmed Issa
How long has it been since you ate?
-7 days.
Swear?
-I swear.
Are you hungry?

The head of the opposition-rebel negotiating bloc, Riad Hijab, has said that his meeting with UN envoy Staffan de Mistura was “constructive and useful”.

Hijab said in a statement that the opposition was able to present its preconditions for negotiations, such as ceasefires with a halt of aerial attacks, release of detainees, and access to humanitarian aid as well as the demand that “Bashar al-Assad and officials of his regime have no role in any future political arrangements”.

I expressed my doubts to Mr. de Mistura of the feasibility of negotiating with a regime that has lost its sovereignty and maintains only repression via its killing machine; the regime’s foothold has declined as it scarcely controls 18% of Syrian territory; it has lost control over most border crossings, supply and transportation routes; over half of the Syrian population lives outside the regime’s control, while international forces, cross-border militias, and groups of mercenaries and terrorists fight on its behalf.

A leading member of the Syrian National Coalition, George Sabra, was also sceptical of negotiations. He said the UN Security Council resolution passed last month was “biased” because it “ignores the aspirations of the Syrian people and therefore further complicates the conflict”:
“How can we achieve the political transition contained in Resolution 2254 if Bashar al-Assad remained in his position?”