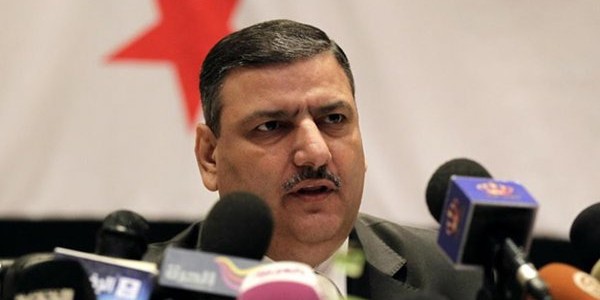 Syria’s opposition has said that it is prepared for negotiations with the Assad regime, but only after ceasefires, access to humanitarian aid, and releases of detainees are arranged.

Former Prime Minister Riad Hijab, who heads the opposition-rebel negotiating committee named last month, set out the terms in a statement on Monday.

The statement declared the “urgency for total adherence” to a UN Security Council resolution, adopted on December 18, “before embarking on further preparations for the negotiating process”. Specifically, it insisted upon…

…lifting the siege imposed on cities and besieged regions in order to enable humanitarian agencies access to deliver aid to all those in need, releasing all unlawfully imprisoned detainees, the cessation of aerial and artillery bombardment of civilians and civilian targets…and other goodwill and confidence-building measures with which negotiations may be possible.

The committee also reasserted the principle that “Bashar al-Assad and officials of his regime have no place in any future political arrangements”, while maintaining State institutions, restructuring the military and security services, “affirming Syrian territorial integrity”, and establishing “a pluralistic system representative of all the Syrian people”.

Three rounds of international talks, fostered by Russian military and political intervention, concluded in mid-December with a nine-point plan that envisaged ceasefires, UN monitoring, and opposition-regime talks in January. However, there was no indication of whether President Assad and his inner circle could remain in power at the end of an 18-month political transition.

Amid continued Russian bombing in support of regime-Hezbollah-Iranian ground offensives, there has been no sign of an advance towards the negotiations.

[There will be] no compromise on the unity of Syrian territory; there is no room for any outside interference in the selection of the opposition’s delegation for negotiations; there is no room for the continuation of Bashar al-Assad, his regime and their symbols in Syria during the transitional period or in any political future.

Reports are circulating that Ahrar al-Sham’s leader in Homs Province, Abu Rateb, has been assassinated by gunmen.

The commander was reportedly in a car with his wife near the town of Talbiseh when the gunmen attacked.

Abu Rateb was formerly the head of the Liwa al-Haq faction.

Saudi Arabia: Tension with Iran Will Not Affect Syria Talks

Saudi Arabia has said its diplomatic row with Iran will not hinder its participation in international talks on the Syrian crisis.

Speaking after talks in Riyadh with UN envoy Staffan de Mistura, Foreign Minister Adel al-Jubeir said, “The recent tensions that impacted the region negatively will not affect…the operations that the United Nations carries out alongside the international community to achieve a political solution in Geneva soon.”

Jubeir reiterated that President Assad has no role in the future of Syria.

Residents of al-Fu’ah, one of two besieged regime enclaves north of Idlib city, have called on President Assad and the Syrian military for help.

Al-Fu’ah and Kafraya have long been surrounded by rebel forces, who control almost of Idlib Province.

Some groups have called on rebels to attack the enclaves in the face of the regime siege of 40,000 people in Madaya in Damascus Province, which has led to more than 30 deaths from starvation (see below).

The pro-Kurdish ARA News claims rebels have killed four people in shelling of a mainly-Kurdish area of Aleppo city.

“Four civilians were killed and more than ten others were wounded in the terror attack,” local activist Jiwan Afrini said. “The wounded have been moved from the rubble to a field hospital for treatment.”

Kurdish forces, allied with the dissident faction Jaish al-Thuwar, have been attacking rebel-held areas to the west and north of Aleppo city. Since Friday, they have occupied three villages near the town of Azaz, close to the Turkish border.

Starvation in Madaya: “The Very Old and Very Young Are Dying”

Vice News adds testimony from besieged Madaya, southwest of Damascus, about the threat of starvation for 40,000 residents.

Rajai, a teacher, told the site that he had lost 50 pounds since the siege began in July.

I had strawberry leaves for dinner today. I haven’t had a real meal in three months….

Kids are eating leaves off the trees, and the very old and very young are dying.

See also Syria Feature: Threat of Starvation in Another Town Near Damascus

Loay, a student, was forced to relocate with his mother when Hezbollah and regime forces tried to overrun nearby Zabadani: “They [the regime] said: Go to Madaya. There you will die, from starvation.”

His mother Umm Mohamad, says, “My only dream is to have a piece of bread.”

Madaya was cut off last summer when the Hezbollah-led offensive was launched on Zabadani. Despite a ceasefire in late September, the Syrian military maintained the blockade on food and supplies.

Local activists say more than 30 people have starved to death and hundreds of infants are at risk. On Monday, reports said three civilians were killed and others wounded as they tried to flee the town, while Hezbollah fighters shot dead two men who were smuggling in food.

Dr. Ammar Ghanem of the Syrian-American Medical Society says the threat is compounded by the lack of medical services:

They have no supplies, and no training — one of their only doctors is a veterinarian who is now operating on humans.

We would like to send in supplies, but of course, we cannot get through the blockade.

Rajai the teacher says he has little hope: “Sure, people may read about us if you write something. But when they finish reading, they’ll forget us.”