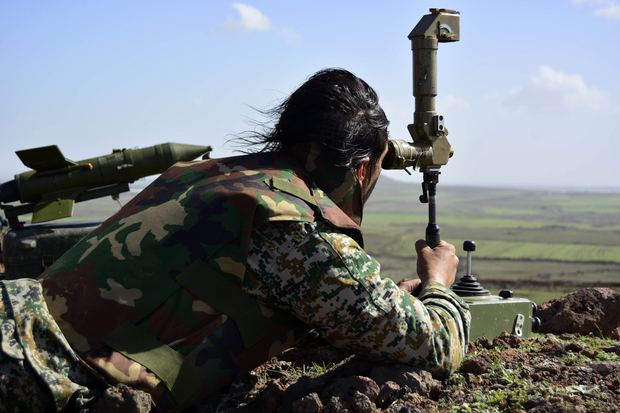 UPDATE 1545 GMT: A pro-opposition journalist, Abdurahman Harkoush, has acknowledged that regime forces have captured the town of Sheikh Miskeen.

Harkoush says rebels have launched a counter-attack on the eastern outskirts.

Footage of the fighting and entry of regime forces into the town, with Russian warplanes overhead:

Regime troops fire on a rebel:

Rebels blow up a regime T-72 tank and capture a Shilka artillery system:

ORIGINAL ENTRY: In its largest offensive south of Damascus in months, the Syrian military — supported by intense Russian bombardment — is trying to take a key town near the highway to the Jordanian border.

The Syrian army said on Tuesday that it retook the Brigade 82 base and the al-Hesh hills, near the town of Sheikh Miskeen in western Daraa Province.

However, pro-opposition accounts denied that the base had fallen, saying that fighting was occurring in the northwestern section where regime troops had entered.

Sheikh Miskeenn, captured by rebels earlier this year, lies on one of the main supply routes from Damascus to the city of Daraa on the Jordanian border.

The opposition Local Coordination Committees said that Russian warplanes carried out 27 airstrikes on Tuesday and that dozens of troops on both sides were killed in the fighting.

A pro-regime account said that there have been more than 25 strikes by Russian and Syrian air forces so far on Wednesday.

Rebels defending the base:

The National Coordination Body for Democratic Change says that two of its members, Ahmad al-Asrawi and Munir al-Bitar, have been arrested.

Both men were on the opposition-rebel negotiating team named earlier this month after a conference in Saudi Arabia. They were detained on Wednesday at Syria’s border with Lebanon, en route to Riyadh to meet other members of the team.

The group demanded the release of the two men, calling for the international community to pressure Damascus, as well as freedom for all detained women and children.

The NCB’s Secretary-General, Yahya Aziz, said the two men were taken “to an unknown location”.

“Those who want a political solution would not do this,” he said.

Aftermath of an Islamic State truck bomb targeting a checkpoint of the Levant Front and Ahrar al-Sham near Azaz, in northern Aleppo Province near the Turkish border:

Saudi Arabia and Turkey have reaffirmed their backing of Syria’s opposition, during a visit by Turkish President Recep Tayyip Erdoğan to Riyadh.

The Ministry said this month’s meeting in Riyadh establishing a Syrian opposition-rebel bloc for leadership and negotiations was “a historic step” with “a unified vision for the future”.

It condemned an airstrike on December 25 that killed Zahran Alloush, the leader of the Jaish al-Islam rebel faction: “The assassination of leaders supporting a peaceful solution…does not serve the political process.”

Foreign Minister Adel al-Jubeir said, after Erdoğan’s meeting with King Abdullah, “The meeting produced a desire to set up a high-level strategic cooperation council between the two countries.”

Jubeir said the council will deal with matters of security, the military, economies, trade, energy, and investment.