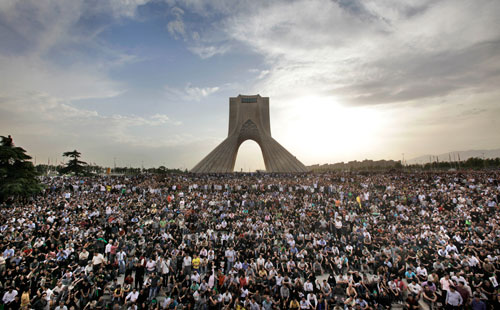 Six years after they were challenged by mass protests following a disputed Presidential election, Iran’s leaders are still worried about “sedition”.

Senior officials on Wednesday marked the anniversary of the regime’s large counter-demonstration with both declarations that it showed the will of the Iranian people and the warning that all must be “vigilant and alert now more than ever”.

The Supreme Leader’s top aide, Ali Akbar Velayati, led the proclamations by hailing “preparedness to oppose the enemy’s sedition” and “steadfastness in defense of the guardianship of the jurist [the Leader”.

Hojatoleslam Kazem Seddiqi, a Tehran Friday Prayer leader, added that Iran’s enemies are still seeking to damage the Iranian political order by spreading “their influence among the people”.

And the deputy commander of the Revolutionary Guards, General Massoud Jazayeri, said that, while the experience of the 2009 “sedition” had ended “naïveté”, the challenge could always rise again.

The talk of sedition is bound up with political in-fighting ahead of February elections for Parliament and the Assembly of Experts. Hardliners have accused allies of the Rouhani Government, such as former Hashemi Rafsanjani, of seeking to foment another uprising. The Revolutionary Guards have carried out a series of arrests, including of journalists, businessmen, and activists.

The Mashhad Friday Prayer leader, Ayatollah Ahmad Alamolhoda claimed on Wednesday that the enemy “is making plans for the elections”:

The 1388 sedition [the 2009 protests] was six years ago…but this wave has left. We must now talk about the 1394 [2015-2016] sedition, which is riskier and more dangerous than the 1388 sedition. The enemy wants to use its experience with the 1388 sedition to create a point of influence in the country.