PHOTO: Rebel graduation ceremony on the Marj al-Sultan base, lost to regime forces on Monday

The Syrian military has made a notable advance east of Damascus, taking parts of the village of Marj al-Sultan and nearby airbases on Monday.

After a heavy, sustained aerial bombardment, the regime forces moved into the area, about 15 km (10 miles) east of the capital, against the leading rebel faction Jaish al-Islam.

State news agency SANA claimed that the Syrian army had established “full control” of the village and two bases. Local sources said last night that clashes continued, including for a helicopter base, but acknowledged that the prospects were not good for the defenders.

Syrian military footage of the area:

Regime control of Marj al-Sultan and the bases would allow the Syrian air force to step up its already-intensive attacks on opposition-held suburbs such as Irbeen and Douma. Yesterday’s advance followed weekend airstrikes that killed and wounded scores of civilians.

Marj al-Sultan had been occupied by the opposition since 2012. This spring Jaish al-Islam held graduation ceremonies for 1,700 recruits on the base.

Putin to Kerry in Moscow: “You Need Sleep” 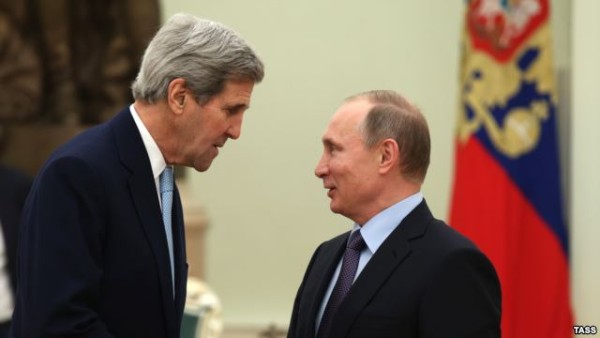 Before meeting Putin, Kerry conferred for three hours with Foreign Minister Sergei Lavrov about international discussions to resolve the Syrian conflict. The Secretary of State is seeking a resolution by the end of March.

At the start of their conversation, Kerry told the Russian President that he appreciated “the seriousness of your commitment in time and thought into these issues” and that the talks were a “strong beginning on opening up possibilities” for a diplomatic settlement.

We see how much effort you are putting into settling a number of pressing issues, we can’t keep up with your travels. You need to get some sleep, I see.

Regime Helicopters Use Kuweires Airbase for 1st Time in 3 Years

Syrian State media are claiming that military helicopters have used the Kuweires airbase in Aleppo Province for the first time in three years.

Located 40 km (25 miles) east of Aleppo city, the base was besieged first by rebels, then by Islamic State until last month when the Syrian military broke through ISIS frontlines.

State TV showed the helicopters taking off and flying over the base, as featured a live interview with Colonel Suheil “The Tiger” Hassan, who led the forces that broke the siege.

Hassan said the “huge accomplishment…was only realised because of the blood of our martyrs and our wounded”.

However, the military site Oryx notes that the claim is an exaggeration, for propaganda effect, as “choppers have landed non-stop over the past three years”.

ANA Press posts footage of yet another Russian attack on the opposition-held area of Aleppo city, this time on a market near a school:

Men rescue children from the destruction:

Aftermath of a Russian airstrike on an oil market near Maarat al-Num’an in Idlib Province in northwest Syria — the Local Coordination Committees said dozens were killed and wounded: