Syria Feature: Kurdish-Arab “Alliance” — Myth or a Magical US Solution? 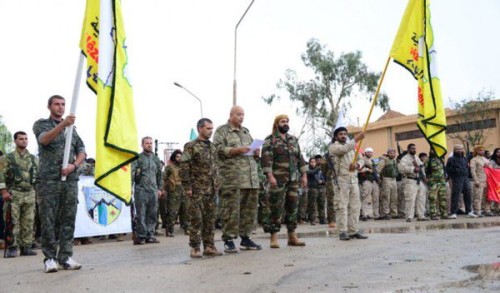 PHOTO: A ceremony of the Syrian Democratic Forces, announcing an operation against the Islamic State in eastern Syria

Weeks after the Obama administration canceled a failed Pentagon program to train and arm Syrian rebels to combat the Islamic State, American officials announced a new effort to equip newly named ground forces in Syria to fight the jihadists.

But 10 days of interviews and front-line visits across northern Syria with many of the forces in the alliance made clear that so far it exists in name only, and that the political and logistical challenges it faces are daunting.

One Arab commander, sitting near the earthen wall that separates this deserted town in Syria from the Islamic State’s front line, bitterly recalled being chased from his Syrian hometown by the jihadists and said he would do anything to reclaim that territory. But then he detailed a list of things his forces needed: ammunition, radios, heavy weapons and more American airstrikes.

“This is the state of our fighters: trying to fight ISIS with simple means,” he said, pointing to a fighter in broken boots, tattered fatigues and a dirty sweatshirt that read “Skateboarding ruined my life.”

See Syria Daily, Nov 3: Obama “No US Troops Except for Special Operations Forces”

Beyond the early logistical factors, the new alliance faces what is perhaps a more serious challenge in the long term: Though it is intended to begin clawing back territory from the Islamic State in mostly Arab areas, nearly all of the group’s fighting power comes from ethnic Kurdish militias.

That demographic reality is likely to further alarm Turkey, a vital American ally that considers Kurdish autonomy near its southern border a security threat. It also limits the forces’ ability to strike the jihadists in predominantly Arab communities — Kurdish fighters have less motivation to fight for those areas, and could deeply anger residents by doing so.

“The backbone of these forces are the Kurdish groups because of their experience fighting ISIS and their numbers,” said Redur Xelil, a spokesman for Syria’s dominant Kurdish force, the YPG. But he talked about how that could be a limiting factor in fighting for cities like Raqqa, the Islamic State’s headquarters in Syria: “We have to be realistic that the YPG can’t go by itself into Raqqa, or people will say, ‘What are you doing there?’”

An Al Jazeera report on the “Syrian Democratic Forces”

A newly appointed spokesman for the alliance briefed reporters in Syria beneath a yellow banner bearing its name in Kurdish, Arabic and Assyrian. But the meeting took place inside a Kurdish militia facility because the alliance does not have its own bases yet, nor flags to put on its cars or a defined command structure, said the spokesman, Talal Sillu.

The combined force is to be commanded by a six-person military council, Mr. Sillu said. But he acknowledged that only one member had been selected so far — Mr. Sillu himself.

Last week, President Obama announced plans to deploy dozens of Special Operations troops to support the new alliance. And before that, American officials said 50 tons of ammunition had been airdropped for Arab fighters with the new group.

But already, things have not always gone as planned. Since the ammunition airdrop, American officials have privately acknowledged that the Arab units it was intended for did not have the logistical capability to move it. So, again, the Kurds were called to help.