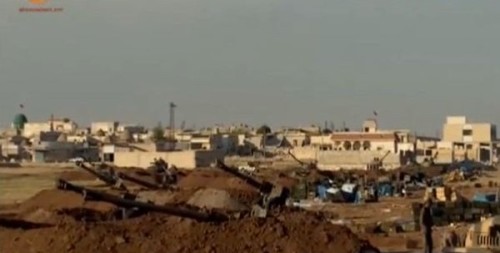 UPDATE 2015 GMT: The regime has held al-Hadher and advanced farther towards the Aleppo-to-Damascus highway. However, claims differ over the extent of the advance.

Pro-rebel accounts claim the offensive has reached the M5 highway with the capture of the ICARDA Military Base, cutting the rebel route between opposition-held Idlib city and Aleppo. Along the way, the regime forces — accompanied by Iranian forces and Iraqi and Afghan militia — moved into the villages of al-Eis, Banes, Rasm Al-Sahreej, Tulaylat, Tal Hadaya, Birnah, and Al-Barqoum as well as claiming several hilltops.

However, pro-rebel accounts say the gains are exaggerated: 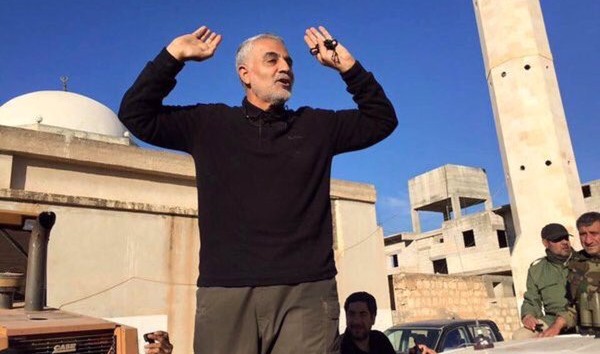 The Syrian military reached a key objective south of Aleppo city on Thursday, but is facing a rebel counter-attack on the town of al-Hadher.

The regime offensive — helped by intense Russian airstrikes and alongside Iranian and Hezbollah forces and Iraqi and Afghan militia — moved into al-Hadher after a month of assaults. It then threatened nearby positions like al-Eis in the hope of reaching the M5 highway from Aleppo to Damascus.

However, pro-opposition accounts soon reported a counter-offensive by the Jaish al-Fateh rebel coalition, with more than 4,000 reinforcements and armor. Al-Eis was secured and rebels then attacked al-Hadher, claiming scores of regime casualties, the capture of another 18 fighters, and the destruction of five tanks and the seizure of six more.

Control of al-Hadher would be the first significant regime success against rebels in five offensives launched from October 7. The other offensives in Hama, Homs, and Latakia Province have made little headway, while rebels have launched a counter-offensive that has taken regime territory in northern Hama Province.

Earlier this week, Assad forces won their first notable victory of 2015 when they lifted the Islamic State’s siege of Kuweires airbase, east of Aleppo city.

Kerry: “Assad’s Leadership is a Non-Starter”

Speaking on the eve of the second set of international talks in Vienna, US Secretary of State John Kerry has declared that President Assad must leave power as part of a political transition.

“Asking the opposition to trust Assad or to accept Assad’s leadership is simply not a reasonable request; it’s literally a nonstarter,” Kerry said. He repeated his position that Assad and the Islamic State have a “symbiotic relationship” which is damaging to Syria.

Sixteen countries, the UN, and the European Union reconvene in Vienna on Saturday, following the first round of discussions on October 30.

Kerry sidestepped the latest Russian maneuver, an attempt to discredit much of the Syrian rebellion by labelling them as “terrorists”: “There are bad guys all around and good guys who are not accustomed to working with each other.”

Russia and Iran, the key allies of President Assad, had been pressing for early elections which might keep him in power. Western diplomats said earlier this week that the initiative is unacceptable.

At the October 30 talks, the US, European allies, and Saudi Arabia put forth a proposal for an 18-month transition in which Assad would depart after a year. Russia and Iran rejected the plan.

On Thursday, Russia tried to press its line on “terrorists” by blaming unnamed rebel factions as well as the Islamic State for chemical attacks.

“Islamic State and some other radical Islamist groups in the Middle East have indeed gained access to the components and technologies for the production of chemical weapons and began using them more actively in Syria and Iraq,” spokeswoman Maria Zakharova said.

Zakharova claimed Moscow had information that the groups were planning attacks on civilians: “This gas is also used for the purposes of provocation to blame the government for that.”

Russia has blamed previous chemical attacks — including the Assad regime’s use of sarin that killed more than 1,400 people near Damascus in August 2013 — on rebels.

In August, the Islamic State used mustard gas, including on civilian areas, in its battle with rebels near the town of Mare’ in northern Aleppo Province.

A Kurdish offensive has claimed the capture of a section of a key highway in northwestern Iraq, cutting an Islamic State supply route to its positions in Syria.

More than 7,500 Kurdish fighters, supported by US airstrikes, began an assault on ISIS in the town of Sinjar on Thursday morning.

The Kurdish Regional Security Council claimed that peshmerga fighters captured Highway 47, a main route between the Islamic State’s centers of Mosul in Iraq and Raqqa in northern Syria.

The Islamic State captured Sinjar in August 2014, forcing thousands of civilians — most of them from the Yazidi religious community — to Mount Sinjar. Men were detained and executed, women enslaved, and the displaced faced thirst and starvation until they were evacuated from the mountain.

The ISIS advance in the area was a catalyst for US airdrops of aid and then bombing of the Islamic State.

US officials said on Thursday that they intend to step up airstrikes on eight oilfields held by the Islamic State in northeastern Syria, knocking them out for six months to a year to cut ISIS revenue.