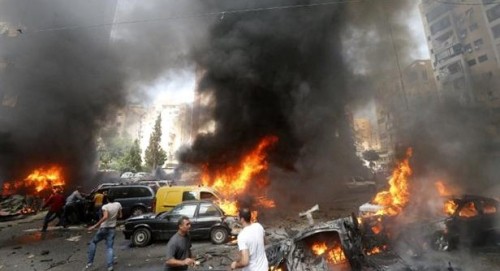 PHOTO: Aftermath of a car bombing in southern Beirut, July 2013

Lebanon’s officials say at least 43 people have been killed and more than 200 wounded in a twin suicide bombing in a southern suburb of Beirut.

The explosions struck the Ain el Sikkeh area, next to the Burj el-Barajneh Palestinian refugee camp, during rush hour. The district is known for support of Hezbollah.

No one has claimed responsibility for the bombings, which occurred within minutes of each other.

There were a series of bombings in the nearby Dahiyeh area in summer 2013. On July 9, 53 people were wounded after a bomb exploded in a busy shopping street. On August 15, at least 21 people were killed and 200 injured by a massive car bomb.