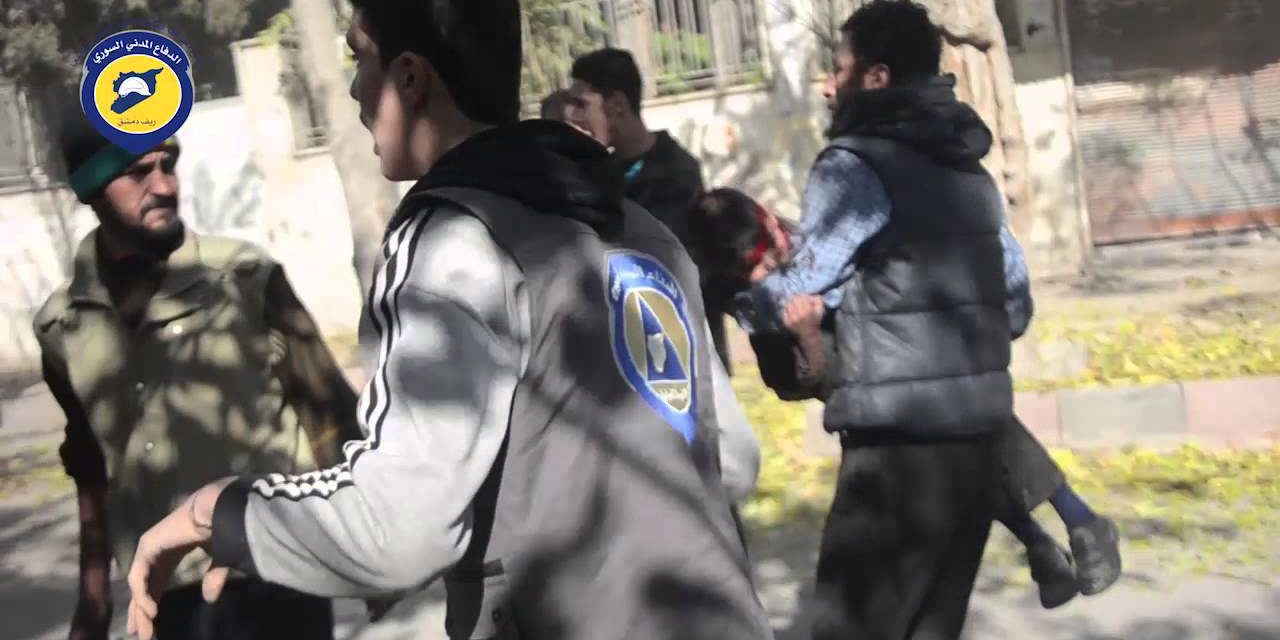 PHOTO: Aftermath of a Thursday regime attack on Douma near Damascus

Attacks by the Syrian military have blocked a possible cease-fire in Douma, northeast of Syria’s capital Damascus.

Regime forces reportedly carried out a dozen airstrikes and fired shells and mortars, while troops tried to enter the town.

Six people were killed, including Douma’s only remaining coroner, and 75 wounded, according to the Unified Medical Office for Douma.

However, on Thursday morning the Syrian military began its assault.

The proposed ceasefire would have been limited to a halt in attacks and arrangements for humanitarian aid to enter Douma, which has been besieged for years by President Assad’s forces.

A Jaish al-Islam said that the group, which has previously refused negotiations, had accepted discussions this week because “previous offers were offers of surrender, they were not ceasefires”.

The opposition Syrian National Coalition has expressed its shock at a statement by the US Republican Presidential candidate Ben Carson comparing Syrian refugees to “rabid dogs”.

Carson said during a campaign stop in Alabama on Thursday:

If there’s a rabid dog running around in your neighborhood, you’re probably not going to assume something good about that dog. And you’re probably going to put your children out of the way….

You’re thinking, “How do I protect my children at the same time?…I’m going to call the humane society and hopefully they can come and take this dog away and create a safe environment once again.”

The Coalition said the remarks were “tactless and lack a sound humanitarian common sense”.

Iran: Assad Must Be Allowed to Stand in Elections

Velayati’s declaration came as Tehran insisted that Assad must be allowed to run in a Presidential election under a plan for transition discussed at two international conferences in Vienna.

Deputy Foreign Minister Hossein Amir-Abdollahian asserted, “Any qualified person, including Bashar al-Assad, is entitled to stand as candidate in any final political process, but it is the Syrian people who will decide.”

The US, European powers, and Saudi Arabia have proposed that Assad step aside during the 18-month transition, but Russia and Iran held out against a specific commitment to his departure. On November 14, a statement from the conference in Vienna made no reference to the President’s future.

Saudi Arabia: We Will Not Allow Moves Against Rebel Faction Ahrar al-Sham

Saudi Arabia has warned that it will not allow any political moves that adversely affect Ahrar al-Sham, the largest rebel faction in Syria.

Nawaf Obaid, an advisor to the Saudi Ambassador to Britain, put out the message on Twitter. He also said that Arab states that “hide behind Russia” will pay a heavy price for their positions.

Activists and video indicate that Russia fired cruise missiles on opposition-held areas in Idlib and Aleppo Provinces in northwest Syria on Friday.

Some of the missiles reportedly hit Idlib city, violating an autumn agreement for halts to attacks both in Zabadani in Damascus Province and near the regime enclaves of al-Fu’ah and Kafraya north of Idlib.

The area is 130 km (79 miles) from the positions of the Islamic State, the supposed main target of Russian operations.

Video: Rebels Near Frontline of Regime Offensive South of Aleppo

Rebels speak to an opposition journalist close to the frontline near al-Eis, south of Aleppo city:

Led by foreign fighters from Hezbollah, Iran, and Iraqi militias, a regime offensive has taken territory between Aleppo city and the M5 highway to Damascus, including the town of al-Hadher close to al-Eis.

Rebels have checked the offensive from reaching the international highway and are pledging to pursue a counter-offensive.

Opposition activists are claiming that 31 people were killed in an olive factory hit by a Syrian airstrike on Thursday.

The factory was in Sheikh Maskin, south of Damascus, near fighting between regime forces and rebels close to the M5 highway between the Syrian capital and Daraa on the Jordanian border. Graphic videos show the casualties.