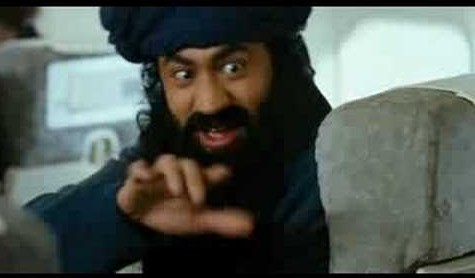 PHOTO: Kal Penn as Kumar Patel in the 2008 film “Harold and Kumar Go to Guantanamo Bay”

Russia’s “information” on the crisis in Syria is not known to start from a position of truth. Moscow was quick to rewrite the Assad regime’s August 2013 chemical weapons attacks near Damascus as a “false flag” operation by rebels on opposition-held territory. More recently, it has portrayed its 25-day bombing campaign as a fight against the Islamic State, even though 80% of the attacks have been on areas occupied by rebels.

Still Russia’s Ambassador to Britain, Alexander Yakovenko, made an extra effort this week in his search for Syria’s “terrorists” — he went all the way to Hollywood to find them.

On Wednesday, Yakovenko castigated Washington for alleged duplicity in the battle against the Islamic State:

US threatens to stop helping Iraq against ISIL if Baghdad asks Russia for help. The terrorists must be rejoicing pic.twitter.com/aKDaf1ae7q

The photograph is not the standard one of an ISIS fighter. One might wonder, for example, when the militants began donning turbans. And that car, with its very nice seats, does not look to be one of the Toyotas that the Islamic State is driving around Iraq and Syria.

Still, the Ambassador’s tweet might have taken its place in the roll call of Russia’s vital information about the campaign against terrorism had it not been for a sharp-eyed observer named Kal Penn.

Kal Penn is a former White House official. More importantly in this case, he was an actor before he went to Washington. Most importantly, he recognized that the laughing, wide-eyed “terrorist” is in fact one of his starring roles.

The Russian Federation ambassador to the UK tweeted this Harold & Kumar pic with seriousness. I can't stop laughing. https://t.co/ZsR041AAVJ

For those of you new to “stoner comedies” — think Cheech and Chong in the 1970s — Harold and Kumar updated the genre, beginning with “Harold and Kumar Go to White Castle” in 2004.

“Harold and Kumar Go to Guantanamo Bay” — the film providing the image for the Ambassador’s tweet — linked the drug-addled heroes with the War on Terror, but one in which the Islamic State had yet to make an appearance. Instead, the boys are facing challenges from the neurotic officials of the Department of Homeland Security to an “inbred trailer home family to the Ku Klux Klan to Neil Patrick Harris”.

Still, Penn’s Indian character of Kumar still makes his mark at the top of Google searches for “terrorist laughing”, more than enough to qualify as hard fact for a Russian Ambassador looking for news from Syria:

Yakovenko’s “terrorist” tweet is still proudly featured on his timeline, although he has moved to other important news: “On the 70th anniversary of the UN Day, Russia renews commitment to the basic principles of the UN Charter.”

However, Penn stayed with the story to make a point