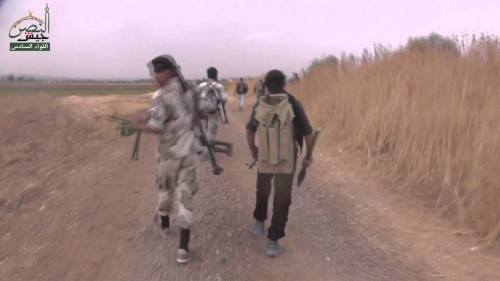 In a sharp change on the battlefield, rebels advanced in Hama Province in western Syria on Friday.

In the second day of an offensive, the Jaish al-Fateh coalition moved across the entirety of northern Hama. Despite a news blackout imposed by the rebels, local sources said that the Syrian Army was “crumbling” in place and, in at least one case, “vanished without putting up a fight”. However, resistance and intense clashes were reported at points such as Morek and Maan.

The sources said that Russian strikes to check the offensive are largely ineffective, as rebels have “adopted” to the bombing since it began on September 30.

Pro-regime accounts acknowledged the loss of territory such as the village of Markabah (see map) and the regime’s possible withdrawal from nearby Lahaya. A Syrian “military source” said there were no Russian aerial operations near the fighting.

The Jaish al-Fateh plan was announced last week as a counter to the six-front regime-Russian-Iranian-Hezbollah offensive, including two fronts in northern Hama Province and other lines in Latakia Province, northern Homs Province, and east and south of Aleppo city.

A tour of Lahaya (Warning — Images of slain regime troops):

In another possible sign of trouble for the regime, rebels and the Islamic State — in simultaneous but uncoordinated attacks — threatened to cut the Syrian military’s only route to Aleppo city on Friday.

Rebel units and the Islamist faction Jabhat al-Nusra moved on the Khanasir-to-Aleppo road to the south of Syria’s largest city, while ISIS attacked to the east.

Despite regime reinforcements including Palestinian units, part of the road remains closed on Saturday morning.