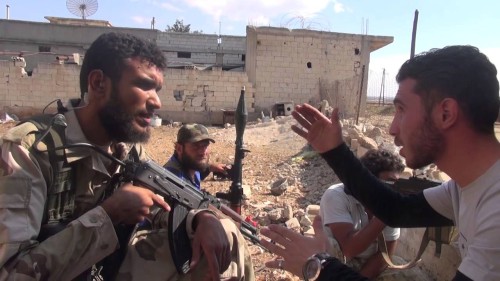 PHOTO: Rebels on the frontline in northern Hama Province

UPDATE 1225 GMT: Activists are claiming the rebel downing of three helicopters on Thursday.

Two of the helicopters were reportedly trying to drop infantry behind rebel lines near Kafr Nabouda in Hama Province while another was downed near opposition-held Salma in northeast Latakia Province, where another regime-Russian offensive has been launched.

Claimed footage of rebels firing on a Russian Mi-24 helicopter in Latakia Province:

Meanwhile, in an interview posted on YouTube, a Free Syrian Army commander claims that Iranian and Russian officers have been alongside Syrian troops on the battlefield. He repeated, “Regime forces did not progress at all” in Hama Province, but said that rebels expect stronger attacks on the ground and from the air “because the regime wants a victory to lift up its forces’ morale and prove to [Russian President] Putin that it is militarily strong”.

Claimed footage of rebels blowing up a tank in al-Mughayr, south of Kafr Nabouda (see map):

Most of the plain was taken by rebels after the opposition captured almost all of Idlib Province to the north in the spring. The Syrian army intermittently launched counter-offensive through the summer, briefly taking some of the area, but has been unable to hold positions.

ORIGINAL ENTRY Pro-regime outlets, rebels, and opposition activists are putting out sharply different claims over the regime-Russian offensive in northern Hama Province in western Syria, which began on Wednesday.

Regime supporters proclaimed success with the capture of several villages and hilltops near the towns of Latameneh, Latmeen, and Kafrzita.

Rebels and activists countered that the Syrian Army’s offensive, covered by intense bombing by the Russian Air Force, failed with rebels destroying 17 tanks and other vehicles and killing dozens of attackers. Videos showed rebel factions effectively using anti-tank missiles, including TOWs, as the Syrian military tried to advance.

One local source said firmly to EA late Wednesday afternoon, “They [the Syrian Army] have not taken one inch of territory.” A fighter with the Islamist faction Jund al-Aqsa said, “The regime stopped progressing, but the mortars are still hitting us.”

One fighter with the Free Syrian Army’s Division 13 was said to have destroyed four tanks using TOW missiles. Pictures showed the Division’s men at a celebratory meal and other fighters riding in a captured tank. 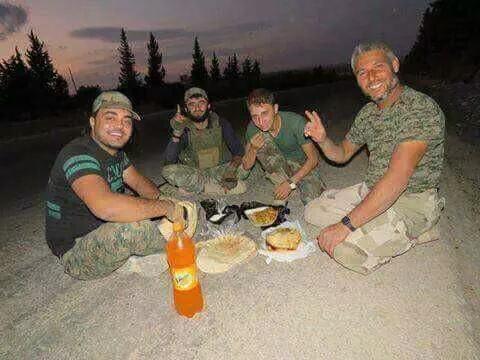 The Syrian Armed Forces pushed too deep into enemy territory; this became reality when they took over the town of Kafr Naboudah, which was then followed by a counter-attack from the Islamist rebels.

The Islamist rebels took recaptured the territory in Kafr Naboudah and pushed the Syrian Armed Forces back towards the eastern entrance of Latmeen.

The Syrian Army is hoping to take a salient of rebel-held territory, measuring 13 km ( miles) east to west at its base and located about 20 km (13 miles) northwest of Hama city.

This would establish the position to press further in an attempt to recapture areas in northwest — including almost all of Idlib Province — taken by the opposition this spring and summer. 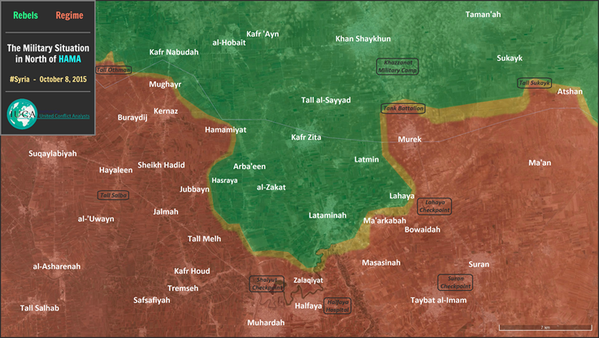 Rebels on the frontline:

Report by opposition journalist Hadi al-Abdallah during the airstrikes and fighting:

Regime troops flee a tank hit by a missile from the Free Syrian Army’s Division 13:

Official footage from President Assad’s militia before the start of the offensive:

Meanwhile, Russian authorities tried to obscure the extent of their attacks on rebels with a distorted account of their launch of 26 cruise missiles from the Caspian Sea.

The Defense Ministry said all the Kalibr missiles, which travelled about 1,500 km (930 miles), were aimed at 11 Islamic State targets. However, the Ministry’s own video showed that one of the two groups of missiles fell upon opposition-held areas of Idlib Province.

Russian President Vladimir Putin brushed away any questions about the state of the offensive or the Russian claims when he said in a televised meeting on Wednesday, “It is too early to tally up a total [of results from aerial operations], but what has been done deserves praise.”

He explained, “As for further action, I expect — as we have agreed — it to be synchronized with the efforts of the Syrian Army on the ground and our Air and Space Force to effectively support the offensive operation of the Syrian Army.”

Putin again shifted Moscow’s line on the “terrorists”, when he said that the Free Syrian Army — the target of many of the Russian airstrikes since September 30 — might be involved in discussions for a political and military resolution.

Foreign Secretary Sergei Lavrov indicated last week that the FSA could also be approached, but then said on Tuesday that this was futile as the group was a “phantom” which did not exist on the ground.

The Russian President said on Wednesday:

[French President Francois] Hollande came up with an interesting idea. According to him, an attempt could be made to pool the efforts of the governmental forces – the army of President al-Assad – and the so-called Free Syrian Army.

Truth be told, we do not know yet where it is and who leads it. However, if it is the combat arm of the so-called reasonable opposition, a good groundwork for a subsequent political settlement in Syria would be laid, if [it and the Assad forces] could pool their efforts in the fight against their common enemy — the ISIL [Islamic State], Jabhat al-Nusra, and other terrorist organizations.

Putin also appealed for co-operation with the major backers of the rebels, Saudi Arabia and Turkey, as well as the US, Iran, and Iraq: “The job will hardly be done properly unless they…participate.”

He said, “If they [foreign partners] say they are abreast of the situation better than we are, because they have operated in Syria for over six months — illegally, by the way, as I have told them recently) — let them provide us with targets they have found, and we will destroy them,”

Activists claim that 20 people were killed and 30 injured in Hreitan in Aleppo Province on Thursday by a car bomb, followed by a regime air attack:

Unnamed US officials have claimed that four of the 26 Russian cruise missiles launched from the Caspian Sea on Wednesday misfired and fell on Iranian soil.

The officials said it was unclear whether the missiles caused any damage.

Russia’s Defense Ministry — which said on Wednesday that all the missiles reached their targets in Raqqa and Idlib Provinces — declined to comment. However, Iranian media said the story was”psychological operations by the US”.

“Since Russian began its operations in Syria, Western media and officials have launched an all-out assault against Moscow,” Fars News, the outlet of the Revolutionary Guards, said.

Iran’s State news agency IRNA reported on Wednesday that an unknown flying object had crashed in the village of Ghozghapan in West Azerbaijan in northwest Iran.

US Orders Jets to Withdraw to Avoid Clashes With Russians

The US military has ordered its jets to withdraw from operations over northern Syria if Russian warplanes are in the area.

The Pentagon issued the command after a Russian jet fighter came within 20 miles of an American mission against the Islamic State in the northeast of the country.

US warplanes are now to pull back if the Russians enter the 20-mile area.

A discussion between the US and Russian military last week, soon after Moscow started bombing, was meant to establish “deconfliction”, the term for the avoidance of clashes. The Russians soon posted video of the meeting on YouTube.