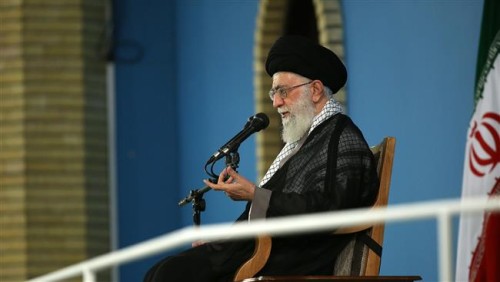 PHOTO: Supreme Leader addresses naval staff and their families in Tehran on Wednesday

The Supreme Leader has launched an attack on the “engagement” foreign policy of the Rouhani Government, repeating that Iran will not enter negotiations with the US following the July 14 nuclear deal.

Addressing naval commanders, their staff, and their families on Wednesday, Ayatollah Khamenei said that Washington was still trying to undermine the regime.

There is a reason we are against talks with US; IRAN's negotiation with US means infiltration. They want to pave the way for imposition.

In #IranTalks they took any chance to infiltrate; Iranian side was vigilant, but they gained chances & acted against our national interests.

He then implicitly turned on President Rouhani and his allies, such as former President Hashemi Rafsanjani, who have advocated engagement to deal with regional crises and economic issues beyond the nuclear deal:

The current challenge of the country is because of some inconsiderate or naïve people who do not realize such realities.

they are few and a minority in front of huge number of the Revolutionary, insightful, and aware people in the country. But they are active, they write, speak, repeat and are supported by enemies.

The Supreme Leader’s attack came as Foreign Minister Mohammad Javad Zarif used an interview with the New Yorker magazine to herald the possibility of discussions with the US:

If we stay on the same line and continue good-faith implementation of JCPOA [the nuclear deal], then we have a possibility to create some confidence that would enable us to deal with other issues.

I’ll take one step at a time. But I’ll take firm steps. And you saw that that works.

However, the Foreign Minister was cautious when asked if discussions would now take place on crises such as Iraq, Syria, and Yemen:

Not yet. We were hoping that the implementation of the JCPOA [Joint Comprehensive Plan of Action] would start reducing some of the mistrust that existed in Iran about the objectives and general policy directions of the United States in the region. Obviously, the comments that we’ve heard over the past two months, which were mostly addressed to the domestic constituencies here in the United States, did not help to alleviate the mistrust.

In another meeting on Wednesday, Khamenei effectively rebuffed the Government’s push for more political and cultural space by invoking the US threat, “Among the schemes [orchestrated] by the enemy’s political and cultural armies are to undermine religious and political beliefs and seek to draw in active and influential youth at different levels.”

Khamenei has said on numerous occasions since July that Iran will not discuss regional crises with the Americans. He has also the criticism of Saudi Arabia which has set aside Rouhani’s hopes of engagement with Riyadh.

On Wednesday, he chided Washington over the US air force’s bombing last weekend of a hospital in northern Afghanistan that killed 22 people, including 12 staff: “They consider no value for human lives; they attack a hospital, murder tens of patients and simply say, “Sorry, it was a mistake!”