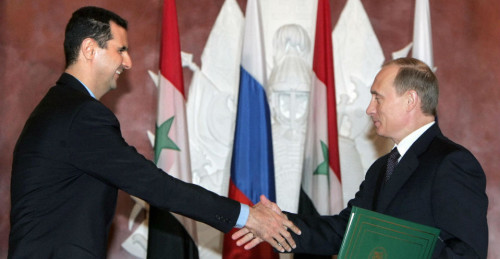 Russia launched its first airstrikes in Syria on Sept. 30, roughly 36 hours after a rare meeting between Presidents Barack Obama and Vladimir Putin. The timing and targeting signaled Moscow’s determination to directly counter Washington’s Syria policy, as factions backed by the CIA were among the first hit. Moscow’s boasts of combating the Islamic State aside, the overwhelming majority of Russia’s initial strikes have targeted rebel factions opposed to the group. Now, a regime ground offensive with Russian air support aims to regain territory from those anti-Islamic State factions along key front lines in Syria’s northwest, far from areas controlled by the Islamic State.

There are two major takeaways from Russia’s intervention. First, Moscow’s strategy is now more than ever in sync with that of Syrian President Bashar al-Assad’s regime. Secondly, the obstacles to the United States formulating a coherent Syria policy have become even more formidable. With Washington on Friday shuttering its failed attempts to arm the moderate rebels, the regional backers of the opposition, in particular Turkey, Saudi Arabia, and Qatar, are on their own — and that promises to be messy.

That Moscow is playing hardball should come as no surprise. Since 2011, Russia has worked to prevent Syria from becoming another example of Western-backed regime change. It has done so not only to protect a long-standing ally and its toehold on the Mediterranean, but also to deter Western interventionism, which it views as undermining Russian power within the international system. Toward that end, Moscow has employed its U.N. Security Council veto and has provided significant political and weapons support to the regime since the beginning of the revolt. Whereas Russia’s abstention in March 2011 on a Security Council resolution authorizing the use of force in Libya paved the way for a NATO intervention ending in regime-change, Moscow’s intransigence on the Syria file has preserved its ally while elevating its own global standing.

Yet the Assad regime has lost significant ground in the past year, shifting Moscow’s incentives. The Islamic State gained in central Syria, Islamist factions hostile to it advanced in the northwest, and a mainstream rebel coalition seized new ground in the south. While increased support from Iran and Hezbollah have helped slow the pace of decline, Assad’s regional allies cannot compensate for the regime’s dwindling manpower. Insofar as they have helped, they have done so through empowering militias — thus accelerating the erosion of state institutions and further decentralizing what was already a fractured power structure beneath Assad. In addition, Washington’s blend of verbal backing for the opposition with weak material support may have encouraged Russian escalation by making it appear less risky for Moscow.

Moscow looks at Syria today and sees a messy array of hostile forces on one side and a declining, fracturing ally on the other. Russian officials have shown little interest in the ideological and strategic differences distinguishing transnational Salafi-jihadi groups such as the Islamic State and al-Nusra Front from self-described “revolutionary” factions, which may seek a political future within a pluralistic Syrian state. Instead, they have labeled all the regime’s armed opponents as “terrorists.”

That assessment led to a single conclusion by Russian and Iranian officials: Whatever their complaints regarding Assad, securing his hold on power offered the best chance of protecting their interests in the Levant.