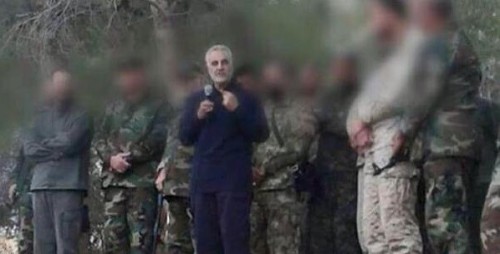 PHOTO: The head of Iran’s elite Qods Force, Qassem Soleimani, with soldiers this week — is this picture from Syria?

UPDATE 1200 GMT: Journalist Hadi al-Abdallah reports a “friendly fire” incident in which Russia has struck a regime position amid an offensive in northern Homs Province:

Russian warplanes have just mistakenly fired on Mulook Checkpoint, one of the the Assad regime's largest army checkpoints in Homs.

Rebels and local sources have confirmed the news. They also claim that a regime-Russian offensive has been repelled in the area, with scores of Assad militia killed and three tanks, a Shilka system, and two other vehicles destroyed.

A Syrian military official said on Wednesday that the offensive would attempt to connect the cities of Homs and Hama. Rastan is near the M5 highway connecting Syria’s third- and fourth-largest cities.

The official claimed, “The Syrian army has intelligence information that will allow it to target the militants’ strategic centers in the town.”

A local source said rebels are holding their ground so far in the pocket around the town of Rastan.

Activists said that Russian airstrikes had again killed many civilians in and near Talbiseh. Claims are circulating of 29 deaths.

More than 50 people died in earlier Russian attacks on the town in its two-week bombing campaign.

Meanwhile, a journalist said three commanders of the rebel faction Ahrar al-Sham were assassinated at a “fake checkpoint” near the opposition-controlled town of al-Houla in northwest Homs.

In the past two months, unidentified gunmen have assassinated eight other rebel leaders and officials in the northern Homs countryside, including members of the local Sharia courts and commanders of Free Syrian Army factions, according to the opposition site All4Syria.

ORIGINAL ENTRY: A “senior US defense official” has supported claims that Iranian soldiers are gathering in northern Syria to join the regime-Russian offensive.

The official put the number in hundreds, rather than the figure of up to 7,000 that has been circulated, but said they were from the elite Quds Force of the Revolutionary Guard Corps. He said they were assembling near Aleppo, Syria’s largest city.

Earlier this week, photos of the head of the Qods Force, Qassem Soleimani, with welcoming troops were posted on social media. Some journalists said he was inside Syria, but this was unconfirmed as others suggested the pictures were from Iran.

Soleimani has been instrumental in Iran’s military support for the Assad regime, holding discussions inside Syria on several occasions. In early 2015, he was in Daraa Province in the south to launch a regime offensive which had limited offensive.

In late July, fearing that President Assad might fall, Soleimani reportedly went to Moscow to encourage Russia to pursue its military build-up and subsequent airstrikes.

As in previous cases — including at first the Russian buildup of warplanes and “advisors” — Syrian officials denied the claims of the Iranian deployment. Information Minister Omran al-Zoubi said the Iranian officers were in a “consultative role”.

Captain Islam Alloush, a spokesman for the rebel coalition, said that it was Iranian-backed Iraqi militia who were being deployed in the area.

Iranian commanders created President Assad’s militia, the National Defense Forces, in autumn 2012 and have trained and supervised Iraqi militia and Afghans offer money and permanent Iranian residency if they fought in Syria.

Three commanders, who returned to service in Iran’s Islamic Revolutionary Guards Corps for the Syrian conflict, have been killed in the past week in northern Syria. Last Thursday, General Hossein Hamedani, the overall commander of Iran’s effort in the country, was slain near Aleppo by the Islamic State as the Syrian military tried to lift a long-time ISIS siege of Kweires Airbase.

Two former commanders of IRGC brigades, including a Guards’ commando force, died earlier this week, reportedly in the regime-Russian offensive in Hama Province.

The Supreme Leader praised General Hamedani in a meeting with students in Tehran on Wednesday, Ayatollah Ali Khamenei said Iran’s “superior scientific position was attained thanks to the country’s security….Therefore you should appreciate security providers such as martyr Hamedani.”

In another signal of Iran’s intentions in Syria, alongside Russian military intervention, Defense Minister Hossein Dehghan referred to the new coordinating center in Baghdad with Russia, Syria, and Iraq, hailing a “new joint action plan…for the complete elimination of the Islamic State”.

Dehghan claimed that “new developments in Syria are currently forming that, God willing, will prepare the groundwork for the complete elimination of takfiri groups”. He said Hamedani had prevented “the collapse of the Syrian army and, consequently, the fall of Damascus” with his organization of the Assad regime’s militia.

At the beginning of a three-day visit to Damascus, leading MP Alaeddin Boroujerdi said Iran will consider sending troops to Syria upon the request of the Assad regime.

Boroujerdi, who chairs Parliament’s National Security Commission, said any request will be discussed by the Majlis.

President Assad expressed his appreciation to Boroujerdi in a meeting on Thursday, saying that “the outcome of such anti-terror efforts and cooperation will serve the interests of all nations in the region and in the world”.

Local officials have explained the mystery behind chatter on Tuesday about a “Turkish invasion” of Idlib Province in northwest Syria.

The officials said a group of Turkish soldiers with construction equipment and tanks entered near the Atmeh displaced persons camp to build an insulating wall to keep people from crossing the border.

“The pretext was to prevent infiltrators [from crossing into Turkey] and keep the chaos away from the Turkish borders because the Syrian side is not able to control them,” Sheikh Nayif al-Ali, president of the Shura Council in the Atmeh camp said.

Residents of the camp protested and the soldiers withdrew back across the border with their equipment, while promising to return and start construction soon, opposition media reported.

“This wall will constrain refugees…and make it hard for them to work and live in these areas,” al-Ali said.

The pro-opposition site All4Syria reported that the 3 1/2-meter wall will span more than 900 km (about 560 miles) of the border.

The Syrian military attacked al-Sheikh Maskin in Daraa Province in southern Syria on Wednesday, hoping to push back rebel gains from the past year.

Sheikh Maskin is near the main highway from Damascus to Daraa city on the Jordanian border. In November 2014, the Syrian military tried to capture the town and briefly took part of it. However, the attacks were eventually repelled, and rebels captured the nearby Brigade 82 base in January.