Syria Feature: 138 Killed on Thursday as Regime Bombs from Aleppo to Raqqa to Damascus 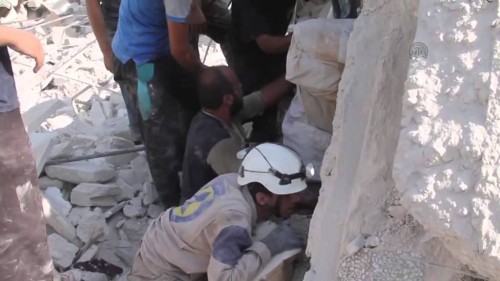 Activists report that 138 people were killed on Thursday across Syria as the regime bombed opposition-held areas from Aleppo city to Damascus Province and also attacked the Islamic State’s central position in Raqqa city in the north.

The Local Coordination Committees said that the death toll included 17 children and 13 women. In Aleppo, 47 people were killed, while 32 died in Raqqa, 24 in and near Damascus, and 21 in Daraa Province in southern Syria.

Regime barrel-bombing of Aleppo city, which has killed thousands of civilians, had eased this summer — in part because of the destruction of the bomb factory at the Safira base near the city — but the Syrian military has also used missiles and artillery.

Thursday’s assault followed the deaths earlier this week of at least 38 people and wounding of 150 in regime-held parts of Aleppo, divided since July 2012. State media blamed rockets fired by “terrorists”.

Regime attacks also killed 27 people in and near Aleppo on Wednesday.

A building collapses, with claims that 25 people died:

Searching for survivors in the Kalasa neighborhood on Wednesday:

Aftermath of another attack on eastern Aleppo city on Thursday:

In southern Syria, the regime attacks were especially intense on areas where rebels have pressed the Syrian military, such as Daraa city and the southern Damascus suburb of Darayya. The military also renewed bombardment of Douma, the northeastern suburb where hundreds of civilians have been killed this summer as the regime tries to break the leading rebel faction Jaish al-Islam.

Dara'a: the two barrel bombs dropped near a wedding party. Bombs followed by artillery shelling. 15 killed and more than 75 injured.

Last week Jaish al-Islam and allies launched an offensive which has taken territory and military positions between Adra and Harasta, northeast of the capital.

The Syrian air force has only occasionally hit Raqqa since it was taken over by the Islamic State in October 2013. No explanation was given for the sudden attacks on Thursday, although it follows a call by regime ally Russia for a “coalition” against the militants.

Casualties being brought into a hospital: