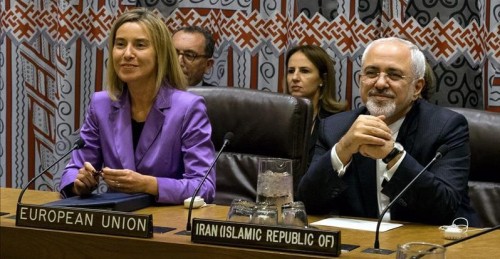 Iran has held its first meeting with the 5+1 Powers since the announcement of the deal over Tehran’s nuclear program on July 14.

Foreign Minister Mohammad Javad Zarif met his counterparts from the 5+1 [US, Britain, France, Germany, China, and Russia] in New York on Tuesday on the sidelines of the UN General Assembly session.

Discussion centered on implementation of the Joint Comprehensive Plan of Action. However, European Union foreign policy head Federica Mogherini said the commission overseeing the process is awaiting the approval of the deal by the Iranian Parliament:

In the context of the agreement, the deadline for confirmation of the agreement is in the month of October. However, in the instance of its early approval by the Iranian Parliament and the necessary preparation of technical measures, the possibility of implementing the agreement on time and sooner is there.

Iran is hoping for the International Atomic Energy Agency’s verification of its compliance by December 15, so US and EU sanctions, which have crippled the Iranian economy, can be lifted or suspended.

However, the process has been complicated by criticism of the deal by Iran’s hardliners, who are insisting on a formal vote in the Majlis. A Parliamentary Commission has said that it will soon submit its report on the agreement, following weeks of hearings.

The Supreme Leader has been ambiguous in his statements about whether the deal depends on a Parliamentary vote. The Rouhani Government maintains that it is the Supreme National Security Council which has the power of approval.

Beyond the nuclear issue, Mogherini was asked about the possibility of cooperation between Iran and the 5+1 Powers over the Syrian crisis. She replied vaguely, “Considering that this important and international nuclear agreement was achieved by dialogue and negotiation, we will proceed about Syria in the same way, but the main framework will be the framework of the United Nations.”

Arab coalition forces have announced that they captured an Iranian boat carrying weapons last Saturday, southeast of Oman’s Salalah coast, according to the Saudi outlet al-Arabiya.

The statement said 14 sailors were arrested.

Rouhani: Saudi Money Will Not Make Up for Mecca Disaster

President Rouhani has maintained the regime’s criticism of Saudi Arabia following last week’s Mecca stampede that killed at least 765 pilgrims, including 239 Iranians with another 248 still missing.

Rouhani, who cut short his stay in New York for the UN General Assembly to attend funerals of some of the victims, said on Tuesday, “Saudi Arabia must act on its legal and international obligations and must clarify how and why this incident occurred.”

The President said Foreign Minister Mohammad Javad Zarif was negotiating in New York with “his counterparts and heads of some regional countries” about the disaster, while he “also discussed this matter with heads of state and emphasized that this incident is not normal”.

Rouhani emphasized, “[This] cannot be resolved with financial compensation. The incident is more important than this.”

The President’s senior advisor Mohammad-Baqer Nobakht accused Saudi Foreign Minister Adel al-Jubeir, who is in New York, of “hiding” and not “speaking with our Foreign Minister”. He warned, “If Saudi Arabia buries the victims without legal permit, it must answer to Iran’s government.”

Nobakht snapped, “Saudi Arabia is a lackey of the US.”

The spokesman of the Culture Ministry, Hossein Noushabadi, accused the Saudis of abducting some of the Iranians still missing from the stampede, including the former Ambassador to Lebanon Ghazanfar Roknabadi: “It seems that a plot had been hatched and I imagine that the Saudi security forces have kidnapped them and this is a serious possibility.”