Iran Daily, Sept 11: Victory for Nuclear Deal in US Congress 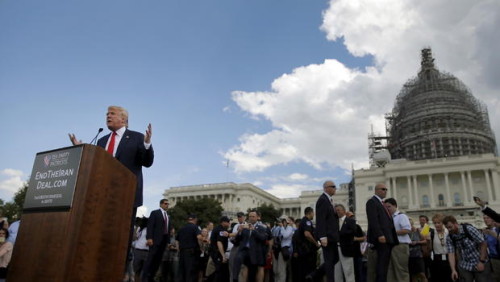 Opponents of the July 14 nuclear deal between Iran and the 5+1 Powers have failed to block the agreement in the US Congress, removing a major hurdle to implementation.

A motion in the US Senate to close debate and to vote on a resolution of disapproval fell two votes short on Thursday. The cloture motion needed the support of 60 Senators, but only passed 58-42.

The Obama Administration triumphed because only four of the Senate’s 44 Democrats joined Republicans in opposing the deal.

If the cloture motion succeeded, a majority of Senators would have then backed the resolution of disapproval, forcing a Presidential veto. At that point, the Administration would probably have prevailed — as two-thirds of Senators are needed to override a veto — but it would have gone through more days of vehement criticism of the agreement.

The Republican Majority Leader, Senator Mitch McConnell, said he would force the exact same process again next week, just to make Democrats vote one last time: “If the President’s so proud of this deal, he shouldn’t be afraid.”

However, it is highly unlikely that any senator will change position.

The agreement will take effect on October 19 — 90 days after its approval by the UN Security Council. Sanctions on Iran will begin to be lifted or suspended when the International Atomic Energy Agency verifies Tehran’s compliance with reduction of uranium enrichment and limits on nuclear facilities, a verdict expected about December 15.