Syria and Beyond Video Feature: Russia’s Putin to UN “Do You Realize What You Have Done?” 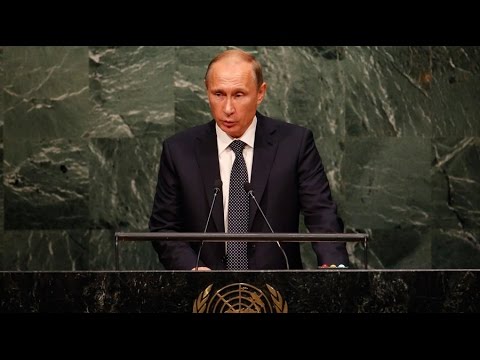 In his big line, Putin challenged those who supported “so-called democratic” uprisings in the Middle East and North Africa since 2011. He said that, “rather than bringing about reforms”, there was only “aggressive foreign interference”.

Instead of the triumph of democracy and progress, we got violence, poverty and social disaster — and nobody cares a bit about human rights, including the right to life. I cannot help asking those who have forced that situation: Do you realize what you have done?

Talking specifically about Syria, Putin played the card of a campaign against the “10,000s of militants” of the Islamic State — and the illusion of “moderate” rebels in the country — to call for support of the Assad regime, saying it would be an “enormous mistake” not to cooperate with Damascus: “No one but President Assad’s armed forces and Kurdish militia are truly fighting the Islamic State.”

The President announced that, when it soon takes the Presidency of the UN Security Council, Russia will convene a group to coordinate action against the Islamic State.

Putin said that the cooperation could be “similar to the anti-Hitler coalition that brought together a broad range of forces, resolutely resisting those who — like the Nazis — sow evil and hatred in mankind”.

Beyond Syria, Putin blamed supposed Western efforts to expand NATO for Russia’s conflict with Ukraine, claiming a “military coup organized from outside triggered a civil war”. He called for “respect of choice” of residents of eastern Ukraine, where separatists have challenged the Kiev Government, and support of economic development in the area.