Syria Feature: How Iran Is Providing Afghans to Fight for Assad 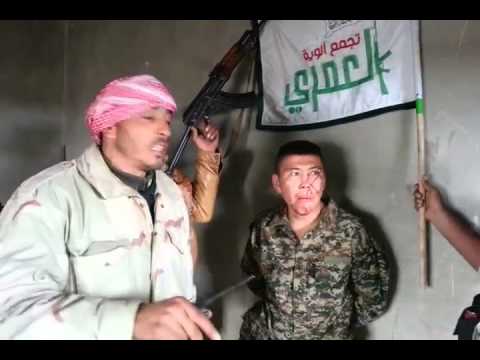 We have known for years of Iran’s efforts to help President Assad by encouraging Afghan emigrants to fight in Syria’s conflict. Tehran has promised money and permanent residency to those men, some of whom have been killed or captured by rebels.

Writing for AFP, Anuj Chopra offers first-hand testimony of Iran’s recruitment and Afghans who have died in Syria:

The fate of two brothers from Kabul, one grievously wounded, the other killed fighting in Syria, spotlights Iran’s covert but active recruitment of Afghan refugees to buttress President Bashar al-Assad’s steadily depleting forces.

Iran, Assad’s key military and financial patron, denies enlisting Afghan mercenaries to fight alongside Syrian forces in the four-year conflict against rebels that has left more than 240,000 people dead and millions displaced.

But interviews with Afghan fighters and relatives of combatants killed in Syria point to a vigorous — and sometimes coerced — recruitment drive of Shia Hazara refugees by Iran’s elite Revolutionary Guards Corps propping up Assad’s floundering regime.

Tears well up in Jehantab’s rheumy eyes as she recalls the haunting parting words of her husband, 35-year-old Haider, when he called two months ago from Tehran: “I am going to Syria — and I may not come back.”

“‘Very few fighters survive Syria’s brutal conflict’, he told me,” said Jehantab, swaddled in a white scarf and sitting with three young children on the floor of her Kabul home.

Haider, she said, was lured by the monthly salary of $700 — a tidy sum for a laborer with no combat experience — and the promise of an Iranian residency permit, an attractive inducement for refugees who otherwise live in constant fear of deportation.

“I begged him: ‘Don’t go, don’t kill yourself for money’,” said Jehantab, who asked to be identified only by her first name in order not to jeopardise her chances of getting the permit.

Haider’s premonition came true — a few days after he left, an Iranian official informed his relatives, also refugees in Tehran, that he had been killed in battle.

Haider was part of a growing wave of jobless young Afghans seeking shelter in neighbouring Iran from decades of turmoil and war tearing their country apart, only to be ensnared in another conflict….

The Iranian embassy in Kabul told AFP it rejects allegations that Tehran is enlisting Afghan refugees as “completely baseless”.

But in a video posted online apparently by anti-Assad rebels last year, a dazed and bloodied Afghan militiaman is seen confessing that he was an illegal immigrant in Iran, where authorities offered him $600 a month to fight in Syria — or face deportation.

It was not possible for AFP to verify the authenticity of the video.

But some Afghans like 27-year-old Mohammed have joined the fight to protect their sect, in particular the defense of the golden-domed Sayyeda Zainab, a prominent Shiite shrine located in a Damascus suburb.

A construction labourer in Tehran, he said he was flown with dozens of other Afghan fighters to Damascus seven months ago on a civilian plane after a week-long weapons-training course.

Part of the all-Afghan Fatemiyoun brigade, named after the Prophet Mohammed’s daughter Fatima, the guerrilla said he fought alongside Hezbollah, the powerful Iran-backed Shiite militia from Lebanon.

“Iran has no combat troops in Syria but the command is in their control,” Mohammed told AFP in Kabul, pulling up his shirt to reveal a sutured shrapnel wound.

He said one firefight near Damascus with Islamic State fighters desperate to achieve “martyrdom” in battle left 19 of his Afghan colleagues dead.

“The Islamic State is a common enemy of Iran and Afghanistan,” said Mohammed, who asked for his last name be withheld. “This is a holy war.”

“Afghan Lives Have No Value”

The rise of Fatemiyoun and other Iran-backed forces made up of Iraqis, Lebanese, and Pakistani Shiites underscores Assad’s growing reliance on foreign mercenaries as rebels ramp up attacks on Damascus.

In a rare admission in July Assad, who has faced a series of recent battlefield losses, acknowledged a manpower shortage faced by his government’s army amid growing deaths and defections.

Back in Jehantab’s home, Haider’s cousin Zahra consoled her and quietly fumed over his death “in a war that isn’t ours”.

“Going to Syria is like signing up for a suicide mission,” Zahra said in a phone call to Hussein, Haider’s brother who also volunteered to fight in Syria, where he suffered a deep shrapnel wound to his stomach.

“I’m OK. There were 300-400 of us (Afghans). Many died, I survived,” Hussein said in a frail voice from a hospital bed in Tehran just before he was about to be wheeled into surgery.

“I hear you plan to go back? Don’t do that. Find work in Iran,” Zahra told him.

As the line went dead, Zahra’s face dropped in her hands.

“Afghan lives have no value — both inside and outside Afghanistan,” she said.