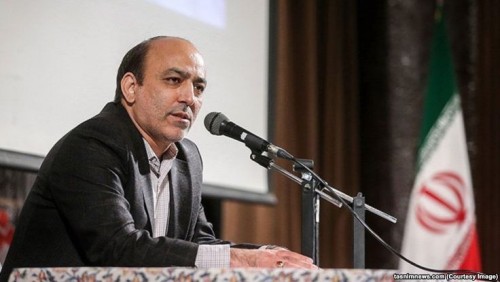 In a direct challenge to “moderates” with Iran’s regime — including President Rouhani — hardliners arrested the leader of a new reformist party on Monday, hours after he held his first press conference.

Ali Shakouri Rad, the Secretary General of the National Unity Party, was detained and later released on bail.

The NUP was announced almost two weeks ago. In a symbol of its intentions, it opened with a video message by former President Mohammad Khatami, who is banned from appearing in Iranian media. On Monday, Shakouri Rad called Khatami the “leader of reformism” and called for the lifting of the restrictions.

Most of the party’s members are from the Islamic Iran Participation Front, which was banned after the disputed 2009 Presidential election with many of its leaders detained. Shakouri Rad was arrested in October 2010. He was released on bail two months later but given a four-year prison sentence in March 2012.

At the press conference, Shakouri Rad promised, “We are here to stay. Not to leave anytime soon.” He then tempted a harsh response with his forthright declaration that the reformists’ first priority is to prevent “extremists” from getting into Parliament in elections next February.

The Interior Ministry said on Monday that the NUP did not have a permit for political activity, only for its formation.

Iran’s judiciary has maintained a tough line on political activity, despite Rouhani’s pledge to open up political and cultural space. Many opposition figures and activists are still imprisoned.

Those held include Mir Hossein Mousavi, who “lost” to President Ahmadinejad in the disputed 2009 Presidential election; fellow 2009 candidate Mehdi Karroubi; and Ahmadinejad’s wife Zahra Rahnavard, a prominent activist, academic, and artist. They have been under strict house arrest since February 2011.

While some reformists have been freed during Rouhani’s tenure, others remain behind bar. Among them are Mostafa Tajzadeh, a former Deputy Interior Minister who was seized just after the 2009 election.

The political stakes have been raised in the past month by a political offensive by Rouhani and his allies, such as former President Hashemi Rafsanjani. Ahead of elections for Parliament and the Assembly of Experts in February, they are attempting to take power from the Guardian Council, which vets and disqualifies candidates.

In 2013, Rouhani won the Presidency with the support of reformists. His recent moves have raised hardliners’ fears that a Rouhani-Rafsanjani bloc may ally with reformists next February to erode the conservative-hardline majority in Parliament.

Rouhani admitted in a press conference on Saturday that he could not directly challenge the judiciary and the hardliners over political prisoners. He said of the case of Mousavi, Karroubi, and Rahnavard, “Some issues are not under the jurisdiction of the administration; the Government can only try to facilitate the matter by providing the preliminaries and the right conditions.”

The head of Iran’s judiciary, Sadegh Larijani, has warned his top officials about the threat to Iran of a “cultural sneak attack”.

Larijani said the Culture Ministry needs to confront the spread of Persian-language satellite TV programs. He also expressed concern about the effects of cellphones, tablets, and social media on the public.

“Under the reform government, unfortunately, some did not even believe in the issue of cultural sneak attacks and, therefore, did not make any efforts to confront it,” Larijani said.