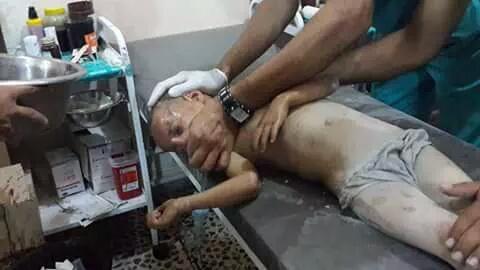 PHOTO: Claimed image of one of the victims of US-led coalition’s airstrike on rebels in northwest Syria on Tuesday night

UPDATE 1915 GMT: The US military has finally admitted the coalition’s responsibility for the Atmeh bombing, albeit in a reply to an individual query rather than a general statement:

Anti-ISIS Coalition claims the airstrikes in Atme saying that the different spellings misled them pic.twitter.com/E3SJoBA98E

Central Command had denied any coalition involvement in the attack on Tuesday night.

The coalition’s Joint Task Force said it could not confirm any civilian casualties in US-led airstrikes, let alone in the Atmeh attack:

Anti-#ISIS Coalition also says they had not been able to verify allegation of civilian casualties in #Atme pic.twitter.com/Aj6n1YbaEq

The US-led coalition has apparently bombed rebels in northwest Syria in a town near the Turkish border, reportedly killing at least 25 people.

The attack on Tuesday night targeted a factory in Atmeh making weapons and ammunition, operated by the independent faction Jaish al-Sunna. Photographs on social media indicated that civilians, including children, were among the victims.

Witnesses said the warplane came from across the Turkish border into Idlib Province. Ankara granted the US permission to use an airbase at Incirlik last month, partly in return for American acceptance of a Turkish plan for “safe zones” in northern Syria.

Both the US Central Command and the Turkish Foreign Ministry denied the claims. CENTCOM said coalition air forces were not conducting air operations near Atmeh, while Ankara issued a statement that the strikes had been not carried out from İncirlik or with use of Turkey’s airspace.

It is unclear why the US or its allies struck Jaish al-Sunna, which started as a local armed movement in the city of Homs and has links to the Free Syrian Army. The group is now part of the Jaish al-Fateh rebel coalition, which has captured almost all of Idlib Province and moved further south into Hama Province since March.

Unnamed sources tried to tie Jaish al-Sunna to the Islamist faction Jabhat al-Nusra — which has been been regularly struck by the US since aerial intervention began last September — with the claim that the “former poultry farm is now used as Nusra weapons factory”.

However, a local activist tells EA that Jaish al-Sunna financed itself by producing arms and ammo for several factions, and that the group is not allied to Jabhat al-Nusra.

If the US carried out the attack, it is likely to cause further damage to the US approach to the Syrian conflict, including the American campaign against the Islamic State. While attacking Jabhat al-Nusra — and even Ahrar al-Sham, the leading faction in Jaish al-Fateh, the Americans have refused to work with rebels throughout the aerial intervention.

After approving $500 million last autumn to train and equip rebels to fight the Islamic State, the US finally put 60 fighters into northern Syria last month. However, some of the men were killed, injured, or captured within days by Jabhat al-Nusra, partly in retaliation for the American airstrikes.

A man speaks to journalist Hadi al-Abdallah as he visits the graves of five of his grandchildren, reportedly killed in the bombing of Atmeh:

#Syria: a Jaysh al-Sunnah rebel sleeps next to his destroyed HQ in #Atmeh, targeted yesterday by a #US warplane pic.twitter.com/Qo3k6U0X3s

Interviews from the site of the bombed factory:

As the six-week Hezbollah-regime offensive tries again to take Zabadani, northwest of Damascus, there are more competing claims about the military situation.

Assad supporters, who have announced imminent victory since a few days after the beginning of the offensive, declared on Wednesday that the Hezbollah-regime forces “finally captured the city center“.

But opposition activists say about 200 regime vehicles, many of them damaged, left Zabadani for Damascus on Wednesday.

Colonel Sohail “The Tiger” Hassan, one of the Syrian military’s best-known field commanders, tries to rally troops after their latest defeat:

In the video, the Colonel tells troops about his injury in the al-Ghab campaign — he was struck by a rebel mortar that killed his deputy — and quotes from the Qur’an, “If you are patient and obedient, Allah will support you with thousands of angels to fight for you.”

The clip is one of a series that are being circulated, apparently to lift the spirits of Assad supporters after the rebel advances. In footage uploaded today, he is mobbed by regime supporters:

And in a video earlier this week, he was shown relaxing with officers aboard his private helicopter.

As Amnesty International publishes a report documenting its war crimes, the Assad regime has carried out more deadly airstrikes in the East Ghouta area near Damascus.

Activists say at least 26 people were killed and 100 injured in the suburb of Douma, which is the base of the leading rebel faction Jaish al-Islam. Another 10 people died in Saqba.

Kafrbatna was also hit in at least nine air raids on East Ghouta by Syrian warplanes. 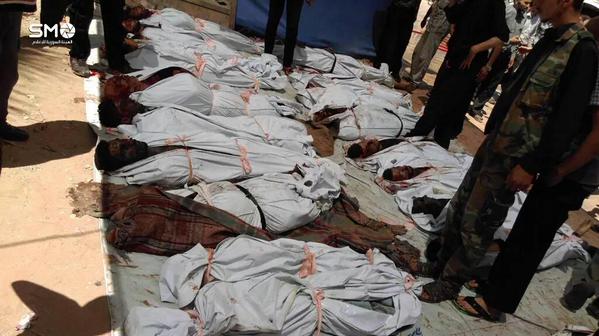 Men retrieve bodies in the rubble in Douma (Warning — Graphic):

Aftermath of the attack on Saqba:

Amnesty said in its report that there were at least 60 aerial attacks on Douma, killing about 500 civilians, between January and June.

Syrian State news agency SANA says that rebel shelling and rockets from East Ghouta have killed at least five people and injured 55 in Damascus on Wednesday.

Rebels say that they were targeting military positions and bases of the Syrian mukhabarat, the military intelligence directorate.

At the end of the day, it is giving up positions in the interest of strengthening and fortifying a fixed defense line.

No army in the world wants to retreat, but it is not worrying. We can recover these positions and we have previously recovered them.

Syrian forces and Hezbollah suddenly pulled out of the northern part of the Plain, after trying to hold a rebel offensive that had taken almost all of neighboring Idlib Province in the spring and then moved south towards Hama city. The Assad troops fell back on Joureen, where two bases are a shield for the regime’s heartland of Latakia Province on the Mediterranean.

On Tuesday — as video showed men in Joureen taunting the retreating Syrian troops — the pro-regime al-Watan gave the first acknowledgement of the defeat, saying redeployment was to “prevent the armed groups from realizing their goals…in the Joureen area”.

Ahrar al-Sham spokesman Abu al-Yazid Taftanaz said, “Iran and Hezbollah (suffered) heavy losses, which caused them to enter into a temporary truce to stop the attacks on Zabadani in exchange for (a ceasefire over) al-Fu’ah.”

Saudi cleric Abdallah Muhammad al-Muhaysini, fighting with Ahrar al-Sham near Fu’ah, declared, “The gangs don’t move except for by the language of force, so the Victory Army addressed them in their language and they understood!”]

Hezbollah’s Al-Manar is reporting that the Syrian military and rebels agreed a 48-hour ceasefire covering both Zabadani in Damascus Province — where a Hezbollah-regime offensive has tried for six weeks to capture the town — and the besieged regime enclaves of Fu’ah and Kafraya in Idlib Province in northwest Syria.

Rebels have not confirmed the agreement.

There have been discussions between the rebel faction Ahrar al-Sham, named by locals to lead the talks, and Iranian officials about a deal for the evacuation of Zabadani, Fu’ah, and Kafraya. However, Ahrar withdrew from the negotiations last week, accusing the Iranians of attempting “sectarian cleansing” of Zabadani, 31 miles (19 miles) northwest of Damascus.

Russia has tried to play down the Saudi rebuff of Moscow’s “peace initiative” in meetings in Moscow on Tuesday.

Russia and Iran have tried since late June to bring together the Assad regime and Saudi Arabia, arguing that an accommodation is necessary to fight the Islamic State.

However, Saudi Foreign Minister Adel al-Jubeir pushed back the effort, telling a press conference after his meeting with Russian counterpart Sergei Lavrov:

A key reason behind the emergence of Islamic State was the actions of Assad who directed his arms at his nation, not Islamic State.

Assad is part of the problem, not part of the solution to the Syrian crisis….There is no place for Assad in the future of Syria.

Without commenting on Riyadh’s continued demand that President Assad step down, Lavrov said:

The Assad regime was not as conciliatory. A Foreign Ministry official said:

The medieval Saudi regime, which lacks any constitutional legitimacy and whose hands are stained with the blood of Syrian and Yemeni civilians, should be the last to talk about legitimacy because it lacks any semblance of it.

It is common knowledge that ISIS was born from the Saudi regime’s mentality in practice, and they share the mentality and practices of beheading, dismemberment, and flogging in the name of Islam.

And Lavrov also may have betrayed his true feelings about the Saudis, when he was apparently caught on an open microphone muttering, “Morons”, during Jubeir’s statement:

The Local Coordination Committees documented the deaths of 98 people across Syria on Tuesday, including 13 children and nine women.

Twenty-seven of those killed were in Idlib Province, where the US-led coalition attacked rebel positions in Atmeh, and 32 were in Aleppo Province amid rebel-Islamic State clashes in Mare’. Thirteen people died in Daraa Province, and 11 in Damascus and its suburbs.