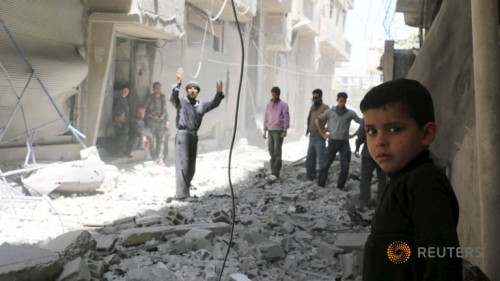 In a 75-page report, Amnesty International has said that the Assad regime’s bombardment and siege of the people of East Ghouta, near Syria’s capital Damascus, are “war crimes”.

“Left to Die under Siege” documents unlawful killing and starvation as “part of a widespread and systematic attack” on the more than 163,000 people living in the area, most of which has been held by rebels since 2012. Amnesty cites at least 60 aerial attacks, killing about 500 civilians, between January and June, and it documents 13 of the strikes that killed 231 civilians and only three fighters.

In 10 of the 13 cases, no military target were in the vicinity, “suggesting the strikes were direct attacks on civilians or at best indiscriminate”. In the remaining three, attacks were “grossly disproportionate or otherwise indiscriminate”. Satellite imagery and witnesses document deadly attacks on mosques, markets, hospitals, and schools.

Residents have been further punished by limited access to food, clean water, medical care, and essential supplies including electricity and fuel. Checkpoints controlled by Assad troops or militia restrict movement in and out of East Ghouta, and teh Syrian military has denied access to UN agencies and other humanitarian groups.

More than 200 people died from starvation or lack of access to adequate medical care in East Ghouta between October 21, 2012 and January 31, 2015, according to the Syrian American Medical Society.

Because of the siege, regime officials and members of rebel groups have been profited from a black-market economy with prices up to 10 times those in Damascus, according to Amnesty. The problem is exacerbated by routine confiscation of residents’ food at regime checkpoints.

Amnesty also criticizes rebels, especially the leading faction Jaish al-Islam, for “abductions, arbitrary detentions, and indiscriminate shelling” with rocket and mortar attacks on populated areas. Their use of imprecise weapons such as mortars and Grad rockets in populated areas amounts to war crimes.

Amnesty renews its call upon the UN Security Council to impose targeted sanctions against all parties responsible for war crimes and crimes against humanity, to enforce an arms embargo on the Assad regime.