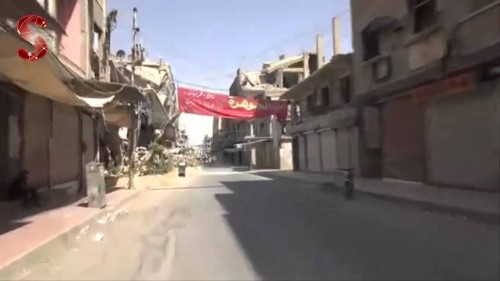 A statement by the UN Security Council on Monday called for discussion of a “political transition”, but avoided any comment on the future of President Assad.

The statement sought the establishment of “a Syrian-led political process leading to a political transition that meets the legitimate aspirations of the Syrian people and enables them independently and democratically to determine their future, including through the establishment of an inclusive transitional governing body with full executive powers, which shall be formed on the basis of mutual consent while ensuring continuity of governmental institutions”.

The international community first called for a transitional governing authority in the Geneva Communique of June 2012. However, countries have always differed on whether that communique envisioned the departure of Assad. The Arab League, the US, and most European countries have said that the President could no longer participate in rule of Syria, but Assad’s allies Russia and Iran have maintained their firm support of him.

The statement, which is not legally binding, was delayed for several days by objections from Venuezula. On Monday, the Venezuelan ambassador, Rafael Ramírez, criticized the Council for not recognizing “the legitimacy of the Assad government”.

While some of our partners believe that it is necessary to agree in advance that at the end of the transitional period the president will leave his post, this position is unacceptable for Russia.

The Council declaration came a day after regime bombing killed more than 120 people and injured more than 300 in the Damascus suburb of Douma. The UN Undersecretary General for humanitarian affairs, Stephen O’Brien — who was in the Syrian capital meeting Foreign Minister Walid al-Moallem at the time of the attack — finally condemned the “appalling” airstrikes on Monday. The UN envoy to Syria, Staffan de Mistura, said the airstrikes were “unacceptable in any circumstances.”

Syrian State TV edited out O’Brien’s reference to Douma, retaining his criticism of rebel rocket and mortar attacks — which the opposition says are on military targets — in Damascus.

The US State Department spokesman, John Kirby, also denounced the Douma attacks and continued, “As we have said, Assad has no legitimacy to lead the Syrian people.”

The regime dropped at least four more bombs on Douma on Monday, but streets were empty and shops closed for fear of the attacks:

On Tuesday, there were more attacks — rescue workers are nearly hit by a mortar as they drive through Douma:

Appeal for Medical Assistance After Mass Killing by Regime in Douma

Both the Local Council and the Unified Medical Office in Douma, near Damascus, has appealed for international medical assistance after Sunday’s regime bombing.

The officials said they had confirmed 112 death and more than 550 injuries. About 40% of the victims were children.

In less than 24 hours, 116 surgeries were carried out in and near Douma. More than 840 liters of bloods were used in the day after the attack.

The officials asked for international help for entry of medical teams and equipment into Douma, which has long been under siege by the Syrian military. It also called for implementation of UN resolutions “to end Assad’s aggression against civilians”.

The Syrian military is claiming the capture of several towns in a counter-offensive in the al-Ghab Plain in Hama Province.

The rebel coalition Jaish al-Fateh had moved across the north of the plain two weeks ago, with Assad forces withdrawing to key bases at Joureen, shielding the regime’s heartland in neighboring Latakia Province.

However, pro-Assad outlets are asserting that the Syrian military has counter-attacked in a quick advance on Tuesday, taking Mansoura, Khirbat Al-Naqous, al-Ziyarah, and Tal Wasit.

Pro-rebel sources suggest that Jaish al-Fateh is withdrawing from areas bombarded by airstrikes to minimize losses. As regime forces approach on the ground, the rebels will counter with anti-tank guided missiles to destroy armored vehicles and infantry. The belief is that the regime will stretch their attacking forces and eventually pull back with heavy losses.

One local activists says, “The regime’s problem is that they apply conventional tactics against a rebel force that operates with guerilla tactics.”

Battles have escalated this summer on the northern Aleppo front, which has been contested between rebels and the Islamic State since January 2014.

Um Hosh is east of the town of Mare’. It was taken by rebels at the start of June, but recaptured by the Islamic State earlier this month.