Syria Daily, August 6: Setbacks for Assad Regime Across the Country 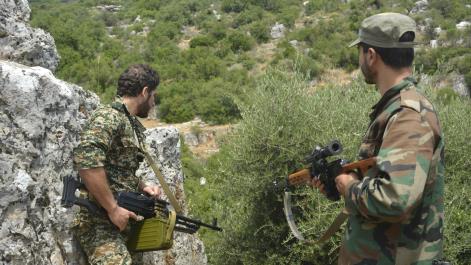 The Assad’s regime proclamations of recovery were checked on Wednesday by setbacks across Syria.

The worst news for the Syrian military appeared to come from the important battlefield of the al-Ghab Plain in Hama Province, linking the rebel-held northwest with the regime’s territory in Latakia Province on the Mediterranean.

For a week, the regime has been heralding a counter-attack in the Plain. The military had halted the rebel advance which had taken almost all of Idlib Province, regaining parts of the Plain. It had even moved back into Idlib near the town of Frikka on an important east-west highway.

However, on Wednesday the rebel coalition Jaish al-Fateh regained the offensive. They seized a series of villages in the western Plain until they were within a few kilometers of the village of Joureen and two important regime bases.

The bases have been used for the regime’s shelling of rural Idlib and Hama Provinces. Perhaps more importantly, they are a shield for Latakia Province, Assad’s ancestral home and a vital area of support for the regime.

Elsewhere, the Islamic State put more pressure on the Syrian military in central Syria, as the militants claimed the capture of the town of Qaryatayn between Homs and Palmyra, the historic city captured by the Islamic State in May.

The Islamic State’s photo statement noted the strategic importance of the advance — Qaryatayn is close to the route connecting Homs, Syria’s 3rd-largest city, with Damascus. The cutting of that link would break the defence line considered essential for the Assad regime retaining even part of Syria.

See Syria Analysis: The Speech of A Desperate President

A local activist said the Islamic State had pressed farther towards Homs, reaching the outskirts of the Mheen area, 12 km (about 7.5 miles) from Qaryatayn,

Even regime “victory” turned sour on Tuesday. Touring Hasakah in northeastern Syria, journalist Aris Roussinos, confirmed reports that Kurdish forces had not cooperated with the Syrian military in the defeat of the six-week Islamic State assault which had occupied part of the city.

Instead, Roussinos said, the Kurdish militia YPG had taken over areas of Hasakah which had been controlled by the regime, and they were now setting up defenses against the Syrian military.

When I left Hassakah, YPG were digging trenches around all the abandoned NDF/SAA bases and driving away all the surviving vehicles

Portraying the weakness of both the Assad regime and the Islamic State, Roussinos concluded, “The fact is the YPG are now the dominant military force across most of northern Syria.”

A pro-opposition activist claims that the Islamist faction Jabhat al-Nusra is handing over crossing gates on the Turkish border to rebel units, including the Free Syrian Army’s Sultan Murad, the Ahrar al-Sham faction, and the Sham Front coalition.

The move follows the Turkish announcement of its intention to create a safe zone in Aleppo Province along the border, clearing out the Islamic State. The handover keeps Jabhat al-Nusra — which has been attacked repeatedly by US warplanes, including last week — out of the way of coalition aircraft.

Those who have been handed over the turkish borders are the #FSA Sultan Murad because they are in their majority Turkmen, Jabhat AL Sahmiyat (Sham Front), Nureddine Zengi, and Ahrar. Those facitons have started to deploy at Daesh confrontation lines in the Northern Rif. The main aim is to cleanse the northern Rif of Daesh up to the eastern rif. This is a prelude to a buffer zone which is believed to be closer than ever.
This swap allows JAN to be away from IC airstrikes.

Rebels are claiming another victory in a difficult 24 hours for the Assad regime.

Opposition fighters attacked in the Damascus suburb of Darayya, claiming that they killed more than 70 regime troops, including members of the elite 4th Division and Republican Guard.

Rebels said that the battle was in part to counter the five-week Hezbollah-regime offensive to capture Zabadani, northwest of Damascus, but local sources said the operation had been planned for months.

The faction Ajnad al-Sham said that a number of buildings had been taken in Darayya, including in the northwest section. The local sources add that the rebels captured strategic positions overlooking the Mezze airbase, where the regime has bulldozed hundreds of homes to establish a buffer zone.

Footage has also been posted of a wounded and captured Republican Guard. 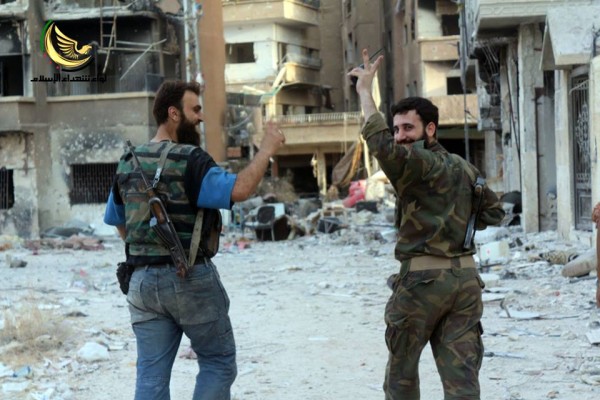 About 8 km southwest of Damascus, Darayya has been a center of opposition since early in the conflict, with large protests in 2011. The suburb has been contested since then, including a massacre of civilians by regime forces in August 2012, but rebels control much of the area.