Iran Analysis: Supreme Leader Tries to Deal with Concern Over Syria and Iraq 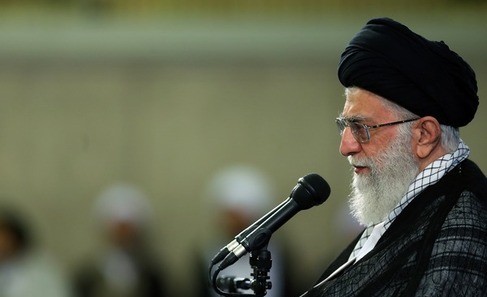 PHOTO: Supreme Leader speaking to Shia activists and broadcasters on Monday in Tehran

Co-written with an EA correspondent in Iran::

In a defiant speech condemning the US as the “real enemy of Muslim countries”, Iran’s Supreme Leader has tried to deal with growing concern over Syria and Iraq.

Addressing Shia activists and delegates to the General Assembly of Islamic Radio and Television on Monday in Tehran, Ayatollah Khamenei warned that the enemy both wanted to establish conflicts between Muslim countries and to spread their influence within those countries.

Khamenei then tipped off Iran’s specific areas of concern, saying that the political and military battles in Iraq, Syria, and Yemen are not “holy wars” but “political wars”.

Iran is facing difficulties on all three fronts. In Yemen, the Iranian-backed Ansar Allah (Houthi) movement is being pushed back in the center and south of the country by forces behind President Hadi, supported by Saudi airstrikes.

In Iraq, the Government is under pressure from protests over corruption, mismanagement, and power cuts amid temperatures of 50 degrees C (122 F). Spurred by the leading Shia cleric Ayatollah Sistani, Prime Minister Haidar al-Abadi has announced reforms.

Perhaps the most serious crisis for Iran is the 4 1/2-year Syrian conflict, with Tehran’s ally President Assad under increasing pressure and facing defeats across the country. A Russian-Iranian “peace initiative” collapsed last week because of Saudi resistance, leaving Tehran with the question of whether it puts more economic and military resources behind the Assad regime.

The Supreme Leader not only warned of “partition and disintegration” in Iraq and Syria but linked the two countries as front-line crises for the Islamic Republic: “If Iraq disintegrates, then Syria is the main goal of our enemies.”

Khamenei sought support through his declaration of the backing of people in Yemen and Bahrain, where protests have been suppressed by the monarchy since February 2011: “This is not Iranian direction but support of all groups and countries in the battle with Israel.”

He assured that, while the US is seeking influence inside Iran and the region on all levels — political, economic, and cultural — “Iran is serious in providing resistance”.