Syria Daily, August 20: The Bombing and Fighting Near Damascus 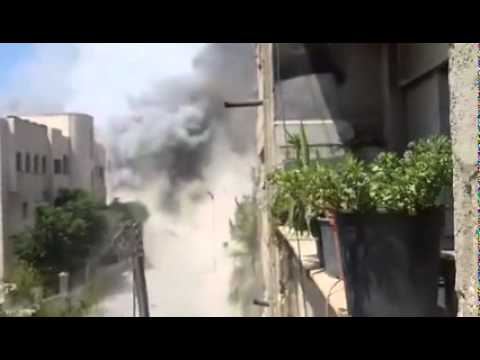 IMAGE: An airstrike on Douma, east of Damascus, on Wednesday

Analysis: Turkey Nears Joint Operations with US for “Safe Zone” — But Will It Be Protected from Assad?

Four days after its mass killing of civilians in Douma, the Syrian air force is continuing bombardment of Damascus suburbs.

On Sunday, at least 112 people died in Douma, east of Damascus, from bombing and shelling. The attacks continued on Wednesday:

The Local Coordination Committees reported confirmation of 23 deaths in and near Damascus yesterday, among 55 casualties across the country.

The Syrian air force responded with strikes on the town. Among victims were Civil Defense members — one was killed and three wounded as they filmed attacks near their building:

Last weekend, just before the mass killing in Douma, the Jaish al-Islam faction struck in Harasta, killing regime troops at the Vehicle Directorate.

Harasta, with a pre-conflict population of about 40,000, has been contested between the regime and rebels since autumn 2011.

There are more conflicting claims this morning over the state of the 7-week Hezbollah-regime offensive to take Zabadani, 31 km (19 miles) northwest of Damascus, which has been held by rebels since January 2012.

Pro-Assad outlets claim this morning — as they have done for weeks — “SAA [Syrian Army] and Hezbollah Nearing Victory“, with surrenders of rebels near the the town center.

But pro-opposition activists are reporting a rebel attack from the east to assist colleagues inside Zabadani:

This comes after #Hezbollah admits losing contact with over 2 dozen of its fighters in #Zabadani. Let more disappear.

State media later admitted the rebel counter-attack while trying to minimize it:

An army unit and the Lebanese Resistance foiled terrorists’ attempt to infiltrate towards a military post from the eastern side of al-Zabadani city in Damascus Countryside, leaving large numbers of terrorists dead or injured, a military source said.

Ongoing clashes are reported in the al-Ghab Plain in Hama Province, two days after the Syrian military launched a counter-offensive.

The Jaish al-Fateh rebel coalition said they have closed on Msheek and al-Ziyarah, taken by the regime on Tuesday. The Syrian army still holds Tal Wassit, Mansoura, and Khirbet al-Naqous.