Iran Feature: Tehran Reaches Out to Turkey Over Syria 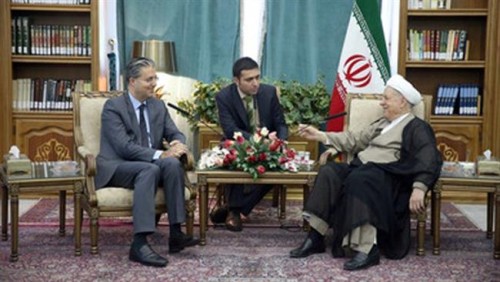 Days after the blocking of Iran’s “peace initiative” on Syria — including plans for the Foreign Minister to visit Turkey — the Rouhani Government has reached out again to Ankara.

The approach came in a meeting between former President Hashemi Rafsanjani and the Turkish Ambassador in Tehran on Wednesday.

Rafsanjani’s headline statement was a warning that the Islamic State is using the “poison” of regional conflict to establish itself in Turkey. “It is not unlikely for Daesh to have built bases for itself in Turkey,” he said.

However, the broader goal of the appeal is to bring Turkey into high-level talks to resolve the Syrian crisis. Last week, Saudi Arabia dealt a blow to the Russian-Iranian initiative when it insisted — in a press conference in Moscow by the Saudi and Russian Foreign Ministers — that President Assad must give up power before discussions on a transitional government can develop.

When news of the Saudi demand reached Foreign Minister Mohammad Javad Zarif, who was in Lebanon meeting Hezbollah leader Hassan Nasrallah, he cancelled his next stop in Ankara.

Officially, Iran said the visit was postponed to this week, but there is no sign so far that it will take place. Instead, Zarif met Russian Foreign Minister Sergei Lavrov in Moscow on Monday to discuss the next steps.

Iran is also concerned by Ankara’s plans for a “safe zone” in northern Syria along the Turkish border. Nominally, the proposal — reportedly now agreed with the US — is to clear out the Islamic State; however, it can also be used to protect a large area from Assad’s warplanes.

Rafsanjani told Ambassador Hakan Takin, “It is evident that hands are at work to ruin relations between the two states [of Iran and Turkey].”

The former President also signaled another attempt at the involvement of Saudi Arabia — with Turkey, a leading backer of the Syrian opposition and rebels — in the “peace initiative”:

In response to Takin’s question regarding Tehran’s ties with Saudi Arabia, Hashemi said, “Iran has declared several times that it seeks to expand relations in an atmosphere of mutual respect,especially with Muslim and neighboring states.

“In practice, we have proven that we cause no trouble for the regional states and they [Saudis] should not be deceived by the Zionists.”

Iran has sent signals of its continuing support to the Assad regime this week with a series of meetings with Syrian officials in Tehran. The latest was a discussion between Speaker of Parliament Ali Larijani and Syrian Health Minister Nizar Yazigi on Wednesday, with Larijani promising continued “humanitarian assistance”.

At the present time, the situation in Syria is unique and I hope that soon we witness the victory of the Syrian government and people in the fight against terrorist groups.

The Islamic Republic has always helped the Syrian government and nation during the current crisis and will spare no help in the future.