Syria Daily, August 26: Assad Troops Under Pressure Across the Country 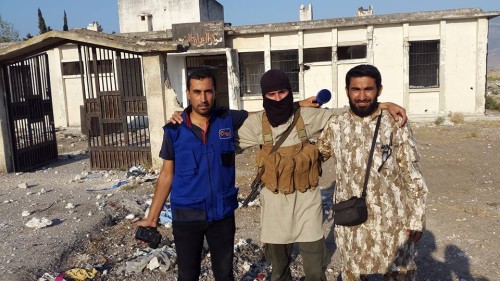 PHOTO: Fighters and pro-opposition journalist in Ziyarah in al-Ghab Plain, recaptured by rebels on Tuesday

UPDATE 1500 GMT: Reports indicate that regime forces have repelled the rebel attack on Bashkoy, north of Aleppo city. There are conflicting reports about the state of the fighting in and near the Abu Duhur airbase.

However, rebels are holding their gains on Tuesday in the al-Ghab Plain in Hama Province.

ORIGINAL ENTRY: Rebels put the Assad regime’s forces under pressure across Syria on Tuesday, seizing the offensive from the al-Ghab Plain in Hama Province to Aleppo city and province and threatening to overrun an isolated regime airbase in Idlib Province in northwest Syria.

AL-GHAB: Pushing back the regime counter-offensive of the past week, rebels took the towns of al-Msheek, Ziyarah, and Tal Wasit.. Assad forces reportedly took heavy losses and then, for the first time, burned their vehicles as they retreated.

Pro-Assad outlets have acknowledged the losses, saying the Syrian Army withdrew from some towns “without [putting up] any resistance“.

Opposition journalist Hadi al-Abdallah at the grain silos in Mansoura:

Another report during the advance:

Rebels moved through the northern plain earlier this month, as the Syrian military fell back to two important bases in the village of Joureen, shielding the Assad heartland of Latakia Province. The Assad forces, including elite units, tried to rally last week by retaking several towns and villages.

The rebel attacks on Tuesday checked any regime hope that it could push through al-Ghab and threaten Idlib Province, lost to the opposition this spring. A regime offensive in Latakia Province, highly touted by pro-Assad sites, also appeared to have stalled on Tuesday after two days.

ALEPPO: North of Aleppo city, rebels quickly moved on the village of Bashkoy on Tuesday, launching a ground assault following artillery fire. By the afternoon, fighting was reported inside the village, with the Syrian air force dropping barrel bombs to try and push back the attackers.

Bashkoy was one of the only areas held by Assad forces after an otherwise disastrous offensive in February in which hundreds of regime troops and Hezbollah, Iranian, Afghan, and Iraqi fighters were killed, wounded, or captured.

Moving into the village:

Jabhat al-Nusra video of an attack in Zahra:

The opposition has pressed the Syrian military throughout the spring and summer in the western area of Aleppo, divided since July 2012. An earlier offensive destroyed the Air Force intelligence building and rebels have threatened to advance into the New Aleppo section.

IDLIB: Rebels are reportedly inside the Abu Duhur airbase, one of the regime’s last military positions in Idlib Province.

After days of shelling, units from the Jaish al-Fateh coalition have advanced on the ground since Sunday. Last night there were claims that up to half the base had been occupied, with casualties among half of the 300 defenders.

The disused base has been surrounded as rebels take almost all of Idlib in the spring and summer.

Without acknowledging the rebel attacks, State news agency SANA says “the army’s air force targeted gatherings of terrorists”, killing a number of them.

ZABADANI: The Assad regime could not even take consolation from its own offensives on Tuesday. The Hezbollah-regime assault on Zabadani in Damascus Province, now more than 50 days old, reportedly suffered a serious setback yesterday.

Dozens of Hezbollah fighters were said to have been killed or wounded in a failed attack from the west of Zabadani, 31 km (19 miles) northwest of Damascus. Local sources said they were trapped in a rebel “killing zone”, with no hope of recovering the wounded, as a convoy of ambulances came from the capital.

Free Syrian Army commander Jameel Raadoun was assassinated in southeastern Turkey on Wednesday by a bomb under his car.

Raadoun was critically wounded as he left his home in Hatay Province. He later died in hospital.