Monocle 24: Safe Zones, A Collapsed Peace Initiative, and the Disaster of US Operations 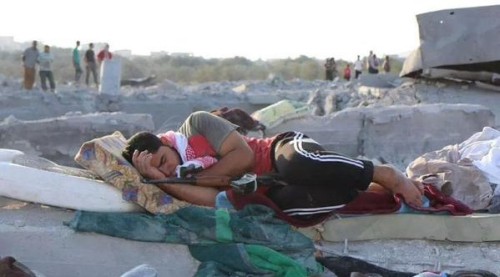 PHOTO: A fighter sleeps at the site of the US airstrike on Syrian rebels on Tuesday night

I spoke with Monocle 24’s The Daily on Wednesday night about the latest situation in Syria.

Looking for a straightforward and positive story, Monocle 24 began with Wednesday’s local ceasefires (see Syria Daily) — brokered by Iran and Turkey — could they be the way forward for a political resolution?

Unfortunately, I replied, both the politics and the military developments were far more complicated, with “bigger” and “even bigger” contests.

A truce may have broken out for 48 hours near Damascus and in northwest Syria, but the larger effort — a Russian-Iranian initiative for high-level political talks — has collapsed.

Far from being saved by the maneuvers, President Assad and his inner circle are in ever-increasing trouble because of rebel advances. Saudi Arabia and Turkey, with its proposal for “safe zones” in northern Syria, want to see him fall.

And, just to add a further twist away from resolution, the US has “screwed up 7 ways to Sunday” with its airstrike this week on an independent rebel faction in Idlib Province near the Turkish border.

The rebels, who already did not trust the United States to be part of this solution, now are even more angered at Washington — which, quite frankly, seems even more confused than I am about the situation.