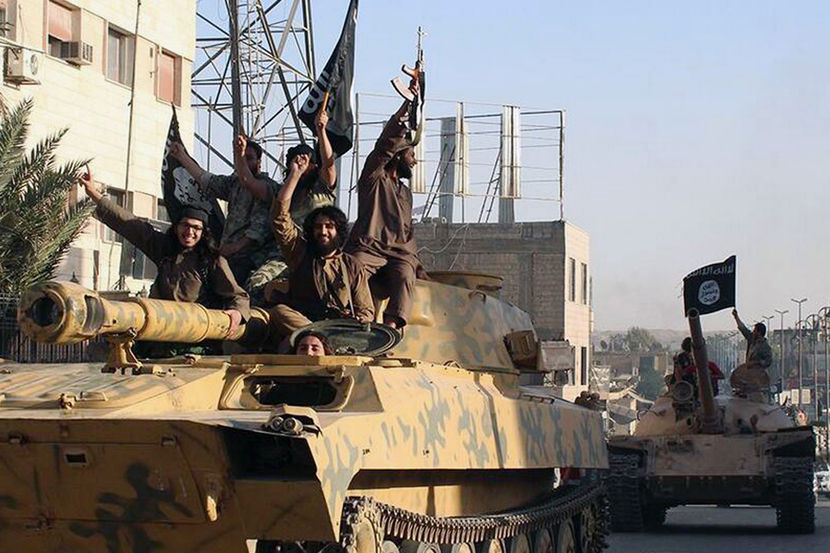 US warplanes have launched a campaign against the Islamic State in its center of Raqqa in northern Syria.

US officials said the attacks “successfully engaged multiple targets” in the provincial capital of Raqqa. The Combined Joint Task Force said the operation focused on “mobility corridors used by ISIL [the Islamic State] to project their fighters and military equipment, and to destabilize the region”.

An American military spokesman added, “This was one of the largest deliberate engagements we have conducted to date in Syria, and it will have debilitating effects on Daesh’s ability to move from Raqqa.”

Unconfirmed reports claim that civilians were killed in the attacks.

The Islamic State took control of the provincial capital of Raqqa, the largest city lost by the Assad regime, in autumn 2013. However, it has come under increased pressure this year as Kurdish forces, assisted by Free Syrian Army units and the American airstrikes, have taken more than 5,000 square km (1,850 square miles) of territory. The Islamic State has lost a 90-km (56-mile) corridor along the Turkish border, with the Kurds joining their cantons of Kobane and Cezire.

In their latest operations, Kurdish forces have been encircling the town of Sarrin, northwest of Raqqa.

Rebels are claiming that they have inflicted heavy losses on Assad forces in attacks in Jobar in northeast Damascus.

The Unified Command in Ghouta, near Damascus, said several factions launched a new operation on Saturday and captured several regime positions in Jobar and on a ring road near Ain Tarma.

Rebel sources said a tunnel bomb — possibly at the “Soap Factory” — had caused scores of casualties, while the Command said a tower was hit by several missiles.

Scenes from the fighting:

Destruction of the regime position at the Soap Factory:

Jobar has been a center of battles, with sustained regime bombardment, since rebels took the area in February 2013. 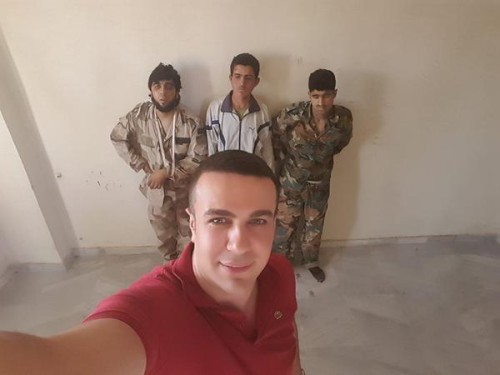 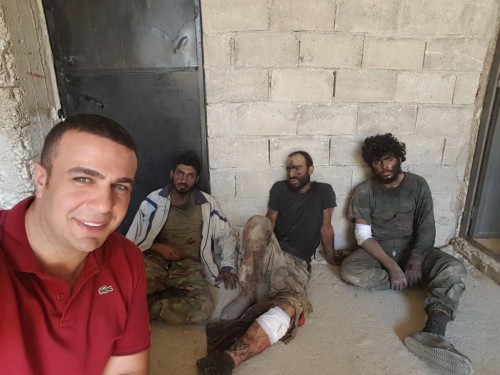 Helweh posted the picture on Saturday on his Facebook page — which also features his picture with President Assad and the First Lady — with the title, “Selfie with ‘Free Aleppo’s’ Terrorists Behind Me”.

Just above the photo is a video of Helweh’s interview of Prime Minister Wael al-Halqi, during this week’s tour of Aleppo which proclaimed progress and “resilience” against the rebel threat.

Turkish Governors: Make Sure Refugees Are Moved Out of Resort Towns into Camps

The offices of governors in Turkey’s western and southern cities have issued official notices calling for Syrian refugees to be moved out of resort towns and into camps.

Hundreds of Syrian refugees have been living outdoors in resort towns such as Bodrum.

The governors’ offices instructed local officials, provincial and district police, and the Disaster and Emergency Management Authority (AFAD) branches “not to allow refugees enter the towns, especially Syrians who do not have a place to stay and sleep on the streets”. It said authorities should “detain those who stay in the city centers and send them to the refugee camps and keep those who do not go to the camps at specific locations to be determined by the AFAD”.

The population of Bodrum, in southwest Turkey on the Aegean Sea, reaches more than a million in the summer months when tourists arrive.

Turkey has long been hosting refugees fleeing the war in Syria, with a rising number that may now exceed 2 million living on Turkish soil. Syrians have come to several provinces across the country and often end up struggling to survive in outdoor conditions after failing to land a job.

Hezbollah-Regime Offensive Tries to Capture Zabadani, One of 1st Towns Held by Opposition

Hezbollah and Syrian forces are claiming success in their offensive to capture Zabadani in Damascus Province, the first town taken by the Free Syrian Army in the fight against the Assad regime.

Syrian State media says the Hezbollah-regime attacks took control of the al-Tal citadel to the west of Zabadani.

Earlier this week, the offensive — which has moved this spring from the Lebanese border to occupy much of the Qalamoun region — took hills to the east of the town.

The advance was supported by more than 50 airstrikes on Friday and further bombardments on Saturday, according to both opposition activists and State news agency SANA.

SANA, citing a “military source”, asserted, “Members of the army and the resistance are hunting down fleeing terrorists in the area, as they continue to advance toward their targets from various directions, inflicting heavy losses upon the terrorist organizations.”

Video of regime forces near Zabadani:

The Free Syrian Army moved into Zabadani, northwest of Damascus, in January 2012.