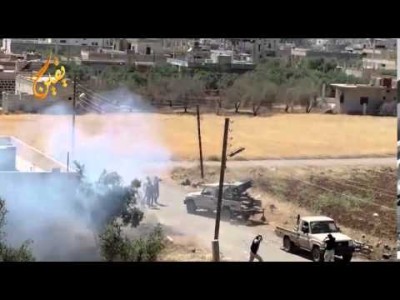 Last week, we reported on the pause of a rebel offensive to take al-Thala airbase, one of the regime’s most important in Syria, following an advance through Daraa Province in the south.

After the capture of the Brigade 52 army base, the Southern Front coalition took nearby villages on Thursday and even entered part of al-Thala on the border of Suweida Province. However, 24 hours later, the force withdrew.

At the time, we wrote, “The exact reason for the pause is unclear.” Although the rebels faced airstrikes and ground resistance, including tanks, they did not appear to have been defeated inside al-Thala. Local sources told EA that the Southern Front was negotiating with leaders of the Druze community in Suweida, as Druze militia were fighting alongside regime forces.

Now the pro-opposition Syrian Mirror offers an explanation solving the mystery. Foreign officials in the joint operations room in Amman, Jordan, ordered the halt to the rebel operations.

The website says that the Southern Front offensive was begun without consultation with the operations room, which includes advisors from the US, European countries, and Saudi Arabia and other Gulf States.

The quick advance of the rebel forces took the operations room by surprise and caused immediate concern. Al-Thala, which includes advanced Su-24 warplanes, has been considered a “red line” because of the possible sensitivity of the Druze community to a rebel entry into Suweida.

The Free Syrian Army had issued a statement that it did not intend to advance further into Suweida, and would merely protect “liberated” villages near the airbase. However, this was not enough to appease the foreign advisors. After a heated debate with the Southern Front, the operations room said it was cutting fighters’ salaries.

Rebels further complied on Tuesday by announcing that operations “to crush the tyrants” had been halted near al-Thala. Negotiations to resume payment of salaries is believed to be underway.

One of a series of messages from the commander of the Jaish al-Yarmouk faction: