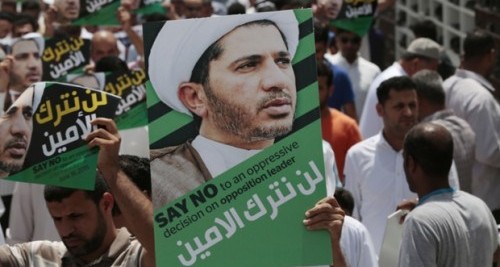 Largely free from international scrutiny or even attention, Bahrain’s monarchy has continued its crackdown on dissent by giving the country’s main opposition leader a 4-year prison sentence.

Sheikh Ali Salman, the Secretary general of the al-Wefaq movement, was accused of “incitement to promote change of the political system by force, threats and other illegal means”, “incitement to loathing and contempt of a sect”, and “publicly insulting the interior ministry”. He was arrested last December because of calls for political reform and accountability, amid Al-Wefaq’s boycot of November elections.

Salman was acquitted of a more serious charge of attempting to overthrow the regime.

The Bahraini regime has faced protests for reform and rights since February 2011. It has suppressed the movement by banning and breaking up mass demonstrations, surrounding villages with security forces, and imprisoning hundreds of activists and political leaders — with some given life sentences.

Among those who are or have been imprisoned are Abdulhadi al-Khawaja, given a life term for his leadership of the Bahrain Center for Human Rights, and his successor Nabeel Rajab, repeatedly detained since 2011.

At least 89 people have been killed by security forces. Hundreds have been arrested and put on trial.

Criticism of the regime has long been muted despite its continuing repression. Reports are circulating that the US — whose 5th Fleet is based in Bahrain — is quietly working to lift a four-year ban on arms deliveries, while Britain opened a new naval base this week.

British Foreign Secretary Philip Hammond issued a mild rebukes on Tuesday: “I am concerned by the verdict and the sentence handed down to Sheikh Ali Salman and I raised this case with the Bahraini authorities during my visit last weekend.”