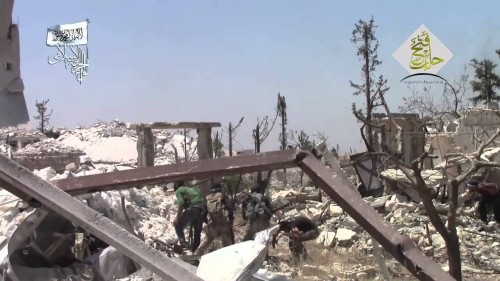 Syria’s rebels attacked, with some success, on fronts throughout the country on Wednesday.

In Aleppo city, the Jaish al-Shamiya operations room has revived an offensive that was delayed earlier this month because of an Islamic State challenge in northern Aleppo Province, which forced rebels to divert forces being prepared for the assault.

The main fighting has been in regime-held areas of western Aleppo city. The rebels took buildings in Layramoun on Tuesday, and followed up on Wednesday by claiming parts of al-Rashidin and al-Jazira. They are also attempting to advance in Khalidiya, where fighters both celebrated and then escaped death from a nearby shell:

It is too early to tell whether the offensive is more of a probing operation to soften up regime defenses or is the start of a protracted assault against the regime’s share of Aleppo, divided since July 2012.

The Governor of Aleppo Province, Mohammad Marwan al-Olabi, denied any rebel advances. He said the reports were “baseless and untrue”, spread by hostile media outlets:

The army still confronts their failed attempts. All reports circulated on those media outlets are lies and misleading, aiming at affecting the morale of Aleppo locals.

Another unnamed source told State news agency SANA that the rebels had been prevented from moving into the Military Research complex near al-Rashidin.

Rebels also moved into parts of the village of Bashkoy, north of Aleppo city, which was taken by Syrian forces in February. Video showed fighters moving through the camp of Afghan troops, probably supplied by Iran, supporting the Syrian military.

In the southwest, the newly-formed Jaish al-Hermon operations room built up an offensive which has begun to take territory in Quneitra Province, including attacks on the villages of Jaba and al-Kroum and the hilltops of Tel Sha’ar, and Tel Bazaq.

Jaish al-Hermon has announced its intention to move from Quneitra into the Western Ghouta area near Damascus, relieving sieges of years on opposition-held suburbs.

A report from pro-opposition Orient News claims that, to shore up the capital’s defenses, the regime has destroyed 500 homes near the Mezzeh military airport and the suburb of Darayya:

In Idlib Province in the northwest, local sources also indicate that the Jaish al-Fateh operations room is building forces to renew its attempt to take the town of Frikka, the regime’s last significant position in the province. On Wednesday, rebels attacked the mount of Sheikh Khattab, which has been disputed since Jaish al-Fateh’s rapid advance in its spring offensive, and the nearby high ground of Tal A’our.

The coalition began attacks near Frikka earlier this week but was checked by regime resistance. The capture of Frikka would open up the al-Ghab Plain, 1/3 of which is already held by rebels, and an advance into Hama Province and a possible move on Hama city.

Video of rebels continuing attacks to recapture the town of Sawran, in northern Aleppo Province near the Turkish border, from the Islamic State:

The Islamic State took Sawran in late May, at the outset of their offensive along a 25-km (16-mile) front north and northeast of Aleppo city. The militants have been checked after initial gains, but rebels are hoping to break the challenge so they can concentrate on other fronts against regime forces.

The Syrian National Coalition has accused the Assad regime of carrying out attacks in Damascus and then blaming them on the opposition.

Coalition Vice-President Hisham Marwa said on Wednesday, “Whenever UN and Western officials visit Damascus we see similar attacks on civilian areas, a devious tactic that the Assad regime reports to in order to blame rebel fighters.”

Marwa asserted that rebels have repeatedly confirmed their commitment not to strike residential neighborhoods as they target military and security positions.

Prime Minister Wael al-Halqi has elevated the regime’s recent anti-Turkish statements, claiming that the “neo-Ottomans” are trying to cut off water in Syria and Iraq.

Halqi used a meeting with Iraqi Water Resources Minister Mohsen al-Shummari on Wednesday to put out his statement. Asserting that “both countries are being targeted by terrorism being funded by the same sides”, he said:

The neo-Ottomans headed by [President Recep Tayyip] Erdoğan seek to occupy the region with pointless war in order for Turkey to lord over the region.

Syria and Iraq have legal and natural rights to the water of Euphrates River which Turkey has no right to deny, infringe upon, or appropriate. Turkey must abide by international accords in this regard.

Relations between Turkey and the Syrian regime have been broken by the 2011 uprising. Damascus sees Erdoğan and his advisors as the primary backers of the rebellion that is threatening to remove Bashar al-Assad from power.

Medical personnel and aid workers have told a US Congressional hearing about the Assad regime’s continuing use of chlorine gas in barrel-bomb attacks on civilians.

The medical and rescue staff called on the Obama Administration to act against the regime, which used chlorine on several occasions this spring, especially in Idlib Province in a failed attempt to prevent rebel advances. The witnesses also sought a commitment to a no-fly zone to protect civilians.

“I live in Syria and I never see these helicopters and airplanes against extremists or training camps and so on. All we see is these planes and helicopters being used against hospitals, against schools,” said Dr. Mohamed Tennari from the Syrian-American Medical Society.

Dr. Annie Sparrow added, “I am a doctor and I am very familiar with death but I have never seen a more obscene way to kill children. I have never watched so many suffer in such an obscene manner.”