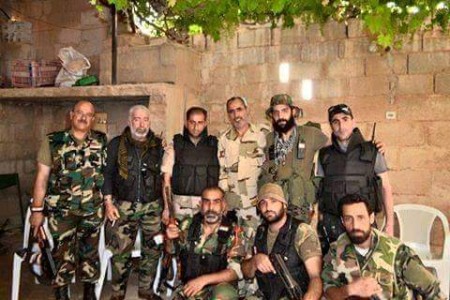 Analysis: Secret US “Train-and-Equip” Program for Rebels Faces Funding Cut — But Does That Matter?

Rebels have paused attacks on a key regime airbase in Daraa Province in southern Syria.

The ground assault began Thursday on the al-Thala base, which holds some of the Assad regime’s most advanced warplanes. Units of the Southern Front rebel coalition briefly moved into part of the complex before pulling back in the face of airstrikes and ground resistance, including tanks.

The exact reason for the pause is unclear, although rebels are denying the claims in State media that more than 100 fighters were killed by Assad forces. The attackers continue to hold nearby villages and isolate al-Thala, after the quick fall of the Brigade 52 army base last week.

Rebels may be negotiating with leaders of the Druze community in Suweida Province, close to al-Thala, for a breakthrough. Reports indicate that Druze militia have been fighting alongside regime forces in al-Thala.

Rebel factions have been looking for reconciliation with the Druze — a religious community based largely in Syria, Lebanon, and Israel — following advances that took them to the borders of Suweida. Those efforts may have been complicated by Wednesday’s news of the killing of 23 Druze in a clash with a unit of Jabhat al-Nusra, even though the Islamist faction has a small role on the southern front and is not involved in the attacks on al-Thala.

The moment when rebels reclaimed the village of al-Bel in northern Aleppo Province from the Islamic State:

Rebels have been trying to push back an Islamic State that began last month along a 25-km (16-mile) front. With the fall of al-Bel, rebels are trying to recapture the town of Sarwan, on the frontline near the Turkish border.

A Friday demonstration in Azaz, near the Turkish border, backing the opposition and rebels:

TThe opposition took control of Azaz, near an important border crossing, in 2012. Rebels pushed out the Islamic State in early 2014.

An Islamic State offensive in northern Aleppo Province, beginning in late May, raised fears that the militants could return to Azaz. However, the militants have been checked well to the east of the town.