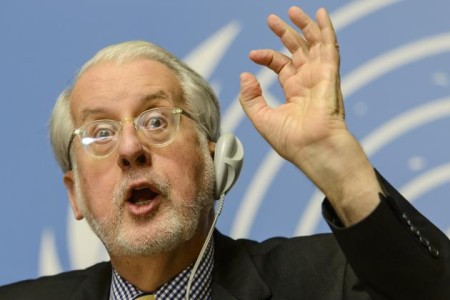 PHOTO: Paulo Pinheiro, Chairperson of the Commission of Inquiry on Syria, during a press conference on Tuesday in Geneva (Jean-Christophe Bott/Keystone)

The UN Human Rights Commission’s Independent International Commission of Inquiry on Syria has issued its latest report, covering March to June 2015, on the situation in the country.

The inquiry is careful not to put specific blame on one side in the conflict. Instead, it generally cites the regime, rebels, and the Islamic State for the abuses and deaths:

More recently documented incidents reinforce earlier findings that the main cause of civilian casualties, mass displacement, and destruction is the deliberate targeting of civilians, indiscriminate and disproportionate attacks, attacks on civilian and protected objects, and the punitive imposition of sieges and blockades.

The report moves from the description of the military situation, shelling and aerial bombardment, attacks on infrastructure such as hospitals, chlorine gas attacks, and “surrender or starve” sieges to its main recommendation: “It is ever more urgent for influential states to promote a political solution as the sole means of bringing an end to the war.”

The Commission was established in August 2011 “to investigate all alleged violations of international human rights law…and, where possible, to identify those responsible with a view of ensuring that perpetrators of violations, including those that may constitute crimes against humanity, are held accountable”.

The concluding section of the report:

59. The parties to the Syrian conflict have conducted the hostilities with little regard to their obligations under international law. An unconscionable number of civilian men, women and children have been killed and injured as a result of the warring parties’ continuing failure to distinguish between those who directly participate in hostilities and those who do not. By their conduct, the belligerents signal a seemingly deliberate decision to expose civilians, unnecessarily, to lethal force.

60. Indiscriminate attacks, attacks on specifically protected person and objects and the use of sieges have come to characterise this brutal war. The use of sieges and denial of humanitarian access to civilians has forced Syrians to suffer extreme deprivations for months, sometimes years. Unthinkable as it is, some — including children — have died from starvation, dehydration and disease, as a result. The lifting of sieges and the ensuring of unimpeded humanitarian access is crucial and must be a condition for any continuing support of the warring parties.

61. The intensification of these attacks in recent months is, in part, a foreseeable consequence of the continuing financial, logistical and in some cases military supports provided to the warring parties by external actors. The current theatre of battle emphasises the growing international dimension within the Syrian conflict.

62. Such actors have obligations under international law. In particular, States should not authorise the transfer of arms if there is a risk that they will be used in the commission of crimes against humanity or war crimes. States that exert influence over the parties in the Syrian Arab Republic have an obligation to ensure their compliance with the rules of international humanitarian law.

63. Fearing no consequences of their conduct, there is little incentive for the parties to the conflict to bring their acts and omissions in line with international law. Recourse to accountability is urgent and essential. It will serve not only to provide a path to justice for victims but may impact on how this war continues to be fought to the benefit of civilians still inside Syria. The absence of decisive action by the community of States, as a whole — and the Security Council in particular — has nourished a now deeply entrenched culture of impunity. States sitting on the Security Council must open a path to justice for victims and refer the situation in Syria to the International Criminal Court.

64. The Syrian people deserve an unambiguous commitment to helping them to return their country to peace. Influential states must make their continued political support conditional on parties’ willingness to compromise and negotiate. To create conditions amenable to negotiations is a shared responsibility. This cannot be achieved without the setting aside of the narrow national interests of a few and the coming together of a community which holds within itself not only the ideals of human rights, but also a deepening realisation that, without peace and justice in Syria, all the world will suffer the consequences.