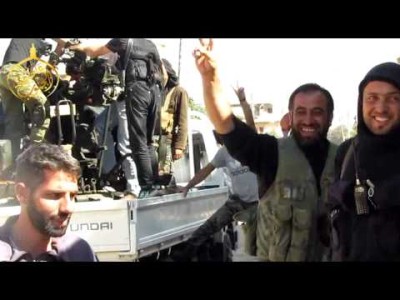 UPDATE 1900 GMT: Local sources update the state of the battle for Daraa city.

Free Syrian Army units have taken some strategic positions, such as the National Hospital and the security branch, as well as checkpoints north of the city that protected the regime’s supply route towards Izra.

The regime is trying to protect besieged forces inside the city and along the road to Damascus with dozens of airstrikes. Most casualties from the attacks are civilians.

Rebels announced on Wednesday that they are launching the offensive to capture Daraa city near the Jordanian border, the starting point of the 2011 uprising in Syria against President Assad.

The “Southern Storm” campaign was announced by the Southern Front coalition in a series of statements, tweets, and videos:

Commanders outlining the objectives of the offensive:

Attacks this morning include an attempt to take the town of Khirbet Ghazaleh (see map), cutting the main highway to Daraa city. There is fighting inside the city, with unconfirmed claims about areas taken by the rebels.

In Daraa city, the large majority of forces is from Free Syrian Army. To the north of Daraa, on the highway from Izra, Ahrar al-Sham and Jaish al-Islam are leading the attacks, with involvement of a few Jabhat al-Nusra units.

Field hospitals and civil defense have mobilized in areas of Daraa near frontlines. Evacuation of civilians is being arranged in some neighborhoods.

In March 2011, protests started in Daraa over the detention and abuse of teenage boys who had sprayed anti-regime graffiti on walls of their school. The subsequent attempt by Assad forces to put down the demonstrations only led to the spread of public dissent throughout much of Syria.

Rebels now control much of Daraa Province, including territory taken this spring, as well as the Old City section of Daraa. However, regime forces have always held the center, about 30% of the city.

On Wednesday, Syrian warplanes struck nearby areas, including a strike of Naeemah that caused casualties, including children:

Rebels taking regime stocks and then resuming fight on frontline:

Rebels launched an offensive last week to claim areas of the divided city, and have moved into parts of al-Rashidin, Layramoun, and Khalidiya.

Scores of Druze men have reportedly deserted from mandatory military service in Suweida Province in southern Syria, the second incident this month.

According to a pro-opposition journalist and activist, the deserters met with Sheikh Walid al-Balaus, who has called on Druze to distance themselves from the Assad regime, then returned to their homes under his protection.

The activist told Syria Direct, “The regime doesn’t dare to respond to the Sheikhs of Dignity [al-Balaus’ group] aggressively. Were the regime to show open hostility towards these men, Suwaida would rise up all together.”

A Jordanian street vendor was killed on Thursday when a stray mortar from fighting in southern Syria hit a marketplace in the Jordanian town of Ramtha, according to a security source.

Several people were wounded and shops were damaged in the market, busy with shoppers for the daily fast-breaking meal during the holy month of Ramadan.

Three other mortar bombs had earlier hit Ramtha, which is close to the Syrian city of Daraa, targeted by rebels in an offensive which was launched on Wednesday.

Iranian media reports that three of Iran’s fighters in Syria have been killed by a mine blast.

The attack reportedly killed the men along the “Damascus-Daraa highway”.

One of the dead has been pictured alongside General Qassem Soleimani, the head of the elite Qods Force.

One of a series of images from the funerals: 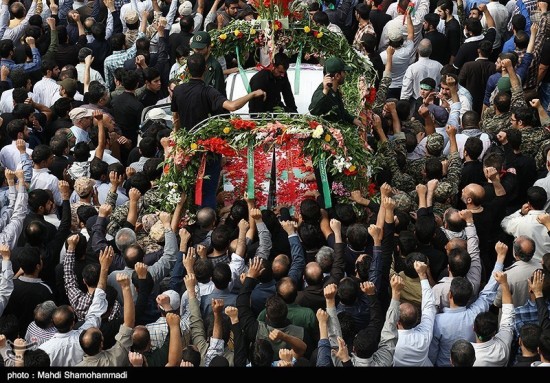 The Islamic State has renewed attacks on Hasakah in northeastern Syria, reportedly moving into a southwestern area of the city on Thursday morning.

The militants failed earlier this month to claim part of Hasakah, with a mixed Arab, Kurdish, and Assyrian population, in an assault on regime forces. However, on Wednesday night, it attacked army and militia frontline positions at the al-Ahdath Juvenile Detention Center, the city’s power plant, and the Panorama Roundabout to the south of Hasakah.

A pro-regime outlet said 11 civilians and five soldiers were slain, with 50 civilians wounded.

The Islamic State claimed on Wednesday that it has blown up two tombs near the historic city Palmyra in central Syria. 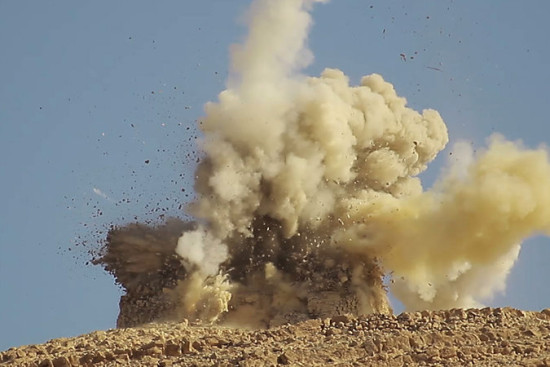 The sites would be the first destroyed by the militants since they defeated the regime in Palmyra, a famed desert stop in Roman times, last month.

Maamoun Abdulkarim, the head of Syria’s Antiquities and Museum’s Department, said Wednesday’s detonations destroyed the tomb of the Shia saint Mohammad Bin Ali, a Shiite saint, and a site marking the grave of Nizar Abu Bahaa Eddine, a Sufi scholar of the 16th century.

The Islamic State has launched a sudden attack on Kobane, the Kurdish center in northern Syria near the Turkish border, including a suicide car bomb near the border gate.

Hospital officials said 15 people were killed and 70 wounded from the car bombing and other attacks by Islamic State fighters.

A reporter for the Kurdish website Rudaw said at least 25 people had died and added that another 20 were executed in Bakha Botan, a village 20 km (12 miles) outside Kobane.

The reporter said residents in the city had taken up arms to defend themselves and claimed, “Groups of ISIS fighters are driving around Kobani’s alleys and streets killing civilians.”

Turkish officials denied claims that the Islamic State fighters had crossed the border from Turkey to launch the attacks. “The data we have prove that the organisation’s members infiltrated into Kobane from Jarablus in Syria,” the Governor’s office in the border region of Sanliurfa said.

Another official asserted, “We have concrete evidence that there was no crossing from the Turkish side,” saying images would soon be published to prove this.

A Syrian Kurdish activist said earlier that the militants entered Syria through the Mursitpinar border crossing.

Kurdish forces, assisted by US-led air support, held Kobane in January after a four-month assault by Islamic State which at one point took much of the town.

This spring, Kurdish militia and rebels have pushed the Islamic State out of much of the area on the border, closing a 90-km (56-mile) gap between the Kurdish cantons of Kobane and Cezire and taking the border town of Tel Abyad last week.